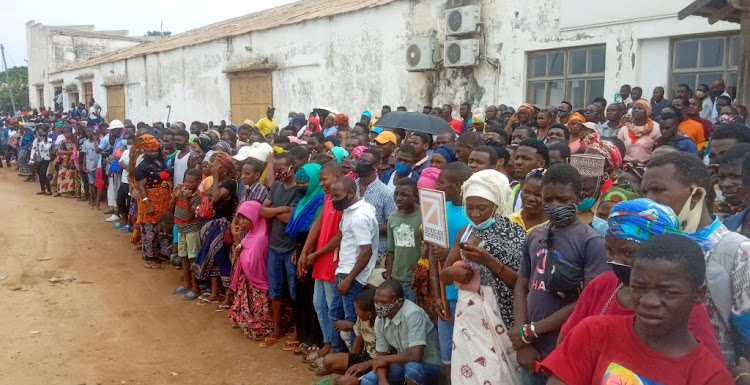 The United Nations has warned of a continuing militant threat in Cabo Delgado, where Rwandan forces are patrolling burnt-out streets once besieged by the militants.

Kagame told a joint news conference in Maputo with his Mozambican counterpart Filipe Nyusi that Rwandan troops would help secure and rebuild the areas destroyed by the insurgency.

"The mission of Rwandan troops in Mozambique continues," he said. "The new action should be to guarantee security in the liberated areas until the reconstruction is finished."

Kagame said the troops would stay as long as Mozambique requests.

Nyusi thanked Rwanda for helping fix what had been destroyed by "terrorists".

Allied Rwandan-Mozambican troops moved in to recapture parts of northern Cabo Delgado - an area hosting $60 billion worth of gas projects that the militants have been attacking since 2017 - in July.

A day earlier, soldiers had laid out rifles and rocket launchers seized from the Islamist fighters, who Mozambique's government has said are on the run.

Some local officials have encouraged civilians to return, according to media reports, and the Rwandan military's spokesman said 25,000 people had been brought home. "It is very safe for them to go back," Ronald Rwivanga told Reuters on Thursday.

But United Nations officials are not so sure.

A document compiled in September for U.N. agencies and other aid groups, seen by Reuters, said it was not clear whether militant capabilities had been much reduced. "Fighting continues in certain locations and civilian authorities have not been re-established," it added.

Children played in the streets of the town of Palma on Thursday and vendors sold goods from kiosks, six months after the militants attacked the settlement, killing dozens and forcing tens of thousands to flee.

But 60 km south in the port of Mocimboa da Praia - a hub needed for cargo deliveries for the gas projects - the streets were largely deserted, flanked by windowless, rubble-strewn buildings and overturned military vehicles.

Graffiti, using a local name for the militant group, read: "If you want to make Al-Shabaab laugh, threaten them with death."

The Southern African Development Community has concluded its two-day 41st ordinary summit of heads of state and government in Lilongwe, Malawi.
News
9 months ago

"THE WAR THAT REMAINS IS HUNGER"

Aside from the Rwandans, a contingent of forces from the regional bloc, the Southern African Development Community (SADC) is also patrolling northern Cabo Delgado.

Rwivanga said the Rwandans had been moving civilians back into the area they control around a $20 billion liquefied natural gas (LNG) project run by oil major TotalEnergies , which was forced to a halt by the Palma attack.

Yet security analysts say the Mozambican military deficiencies that allowed the insurgency to take hold in the north - including soldiers that are ill equipped, undisciplined and poorly paid - will not be easily reversed.

Even with other forces there, they say, security is uncertain outside of small, heavily guarded areas.

Returnees, meanwhile, are more preoccupied with where the next meal is coming from. The World Food Programme said this week that the first shipment of aid had reached Palma since the March attack.

"Now the situation is calm, the war that remains is hunger and lack of jobs," Ibrahimo Suleman, 60, a resident who works for a kitchen-fitting company said.

Many others remain too afraid or unwilling to return, with almost 750,000 people still displaced as of this month, according to the International Organisation of Migration.

The Institute for Security Studies believes it will take time to stabilise the situation on the ground and resume economic activity in Mozambique.
News
9 months ago

Rwanda says it has killed 14 insurgents in Mozambique

Rwanda killed 14 insurgents in Mozambique in fighting this week, an army spokesman said on Thursday adding that a Rwandan soldier had sustained a ...
News
9 months ago

President Cyril Ramaphosa has authorised the use of 1,495 members of the military to help neighbour Mozambique fight an Islamic State-linked ...
News
9 months ago
Next Article