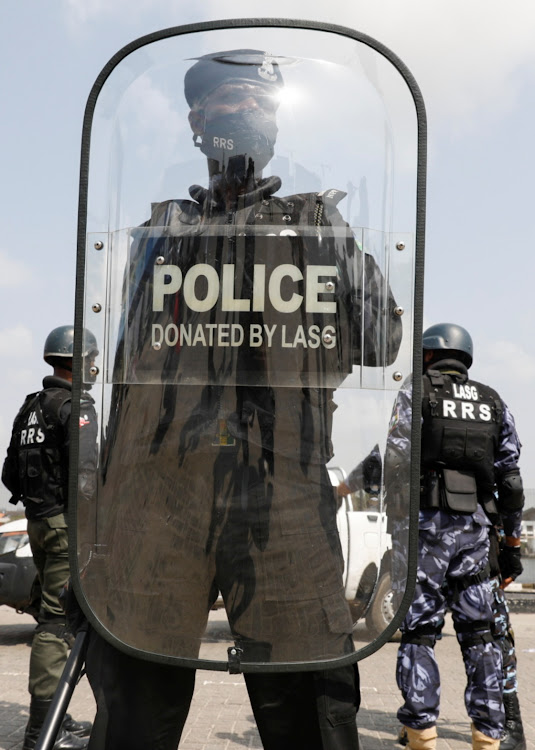 Security forces stand guard during a protest against the reopening of the Lekki Toll Gate in Lagos, Nigeria, February 13, 2021.
Image: REUTERS/Temilade Adelaja

Nigerian police beat and arrested demonstrators on Saturday as a small group protested over the reopening of the site where activists denouncing police brutality were shot last year in the commercial capital, Lagos, Reuters witnesses said.

Rights group Amnesty International and witnesses have said soldiers opened fire on protesters on Oct. 20, killing at least 12 people at a toll gate in the city's affluent Lekki district and another area. The military has denied shooting live rounds and the police have denied involvement.

There was a heavy presence of armed police officers on Saturday at the toll gate, where a group of about 15 protesters gathered despite calls by the government this week to scrap the demonstration, Reuters witnesses said.

At least six of the protesters were beaten with truncheons and arrested before being driven away in police vans.

"They are already manhandling us, but we're not going to be deterred. We're not going to step down," said one man, who did not provide his name and spoke to Reuters as he was being arrested.

A Lagos state police spokesman said in a text message he was unaware of the arrests but would look into accusations that activists had been manhandled.

Nigeria's information minister warned activists earlier this week to drop plans for the protest, saying it risked being "hijacked by hoodlums".

On Friday, one of the two youth members of a Lagos state panel investigating the October shootings resigned, citing "undue intimidation of peaceful protesters" and the panel's vote to reopen the toll gate - a source of revenue for the state government - before the probe had been finished.

Thousands of Nigerians calling for police reforms staged largely peaceful protests nationwide for about two weeks in October, but the Lekki shootings sparked street violence and looting across the country.

The wave of civil unrest was one of the worst since the end of military rule in 1999.

Lagos was under lockdown on Wednesday as a heavy police presence enforced a round-the-clock curfew, hours after soldiers opened fire on protesters in ...
News
1 year ago
Next Article