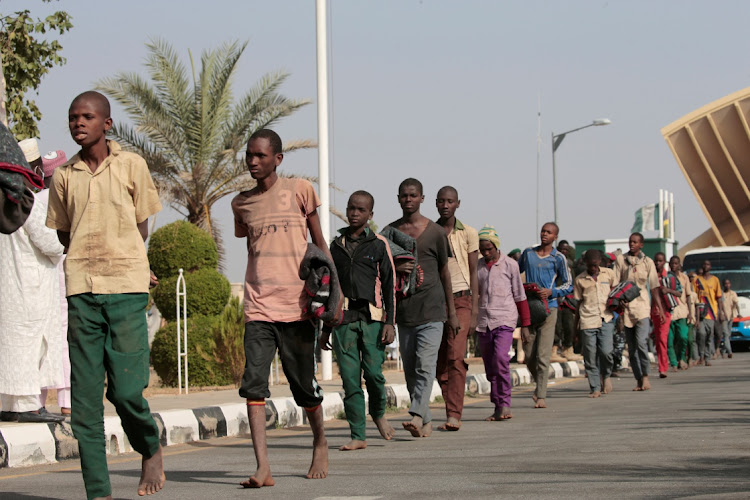 The freed Nigerian schoolboys after they were rescued by security forces in Katsina, Nigeria, December 18, 2020.
Image: AFOLABI SOTUNDE

Dozens of schoolboys who were rescued from kidnappers in northwest Nigeria arrived back home on Friday, many of them barefoot and clutching blankets.

Television pictures showed the boys dressed in dusty clothes, looking weary but otherwise well, getting off buses in the city of Katsina and walking to a government building.

One boy, who did not give his name, said the captors had regularly beaten them with canes. He added that the kidnappers had described themselves as members of the Islamist militant group Boko Haram, although he suspected they were armed bandits.

"They beat us morning, every night. We suffered a lot. They only gave us food once a day and water twice a day," he told Arise television.

"They said I should say they are Boko Haram and gangs of Abu Shekau," he added, referring to a name used by a Boko Haram leader.

"What I experienced, sincerely speaking, they are not Boko Haram ... They are just small and tiny, tiny boys with big guns," he added.

A week earlier, gunmen on motorbikes raided the boys' boarding school in the nearby town of Kankara and marched hundreds of them into the vast Rugu forest.

Authorities said security services rescued them on Thursday, but many details surrounding the incident remain unclear, including who was responsible, whether ransom was paid, how the boys' release was secured and whether all of them are now safe.

The abduction gripped a country already incensed by widespread insecurity, and evoked memories of Boko Haram's 2014 kidnapping of more than 270 schoolgirls in the northeastern town of Chibok.

Six years on, only about half the girls have been found or freed. Others were married off to fighters, while some are assumed to be dead.

Hours before the rescue of the boys was announced, a video started circulating online purportedly showing Boko Haram militants with some of the boys. Reuters was unable to verify the authenticity of the footage or who released it.

TEARS OF JOY, PRAYERS OF THANKS

On Friday, the boys from the Government Science Secondary School walked from the buses in single file, flanked by soldiers and armed police officers, and were taken to the government building to meet the governor.

Another of the boys said they had been fed with bread and cassava. "It was cold," he told Channels TV. Asked how he had felt when the bus arrived in Katsina, he said: "I was really happy," and broke into a smile.

The boys were then brought back and driven off for medical checks, officials said.

A group of their parents waited to be reunited with them in another part of town.

"I couldn't believe what I heard until neighbours came to inform me that it's true," Hafsat Funtua, mother of 16-year-old Hamza Naziru, said earlier in a phone interview.

Describing the moment she heard the news, she said she ran out of her house with joy "not knowing where to go" before returning home to pray.

Last week's mass kidnapping piled pressure on the government to deal with militants in the north of the country.

It was particularly embarrassing for President Muhammadu Buhari, who comes from Katsina state and has repeatedly said that Boko Haram has been "technically defeated".

Buhari said he had congratulated the state's governor and the army, in a brief clip from an interview posted on his Twitter account earlier on Friday.

Any Boko Haram involvement would mark a geographical expansion in its activities from its base in the northeast. The region is also plagued by armed gangs that rob and kidnap for ransom.

Former CNN correspondent Isha Sesay planned to begin her new role as a Goodwill Ambassador for the United Nations Population Fund (UNFPA) with a ...
News
1 year ago

Nigerian ex-minister and Chibok girls champion to run for president

“I want to run for, and win, the 2019 presidential election.."
News
3 years ago
Next Article