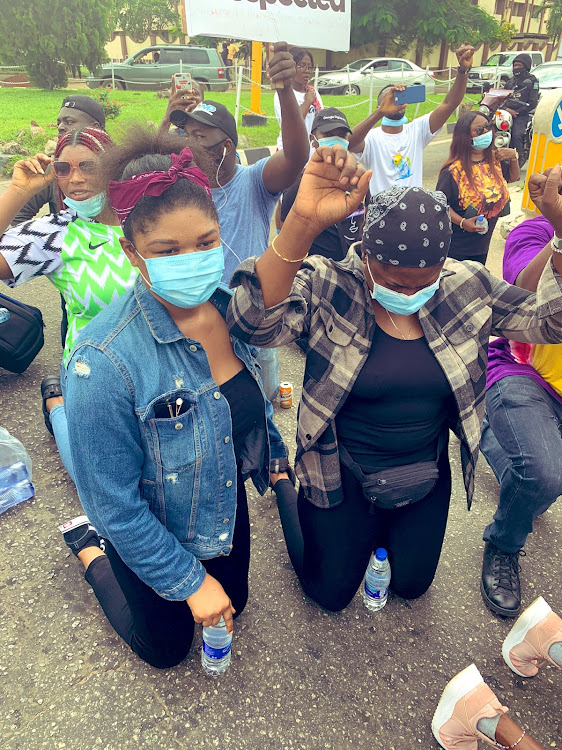 Sporadic protests have broken out across Nigeria in recent days after a video circulated last week alleging to show members of the Special Anti-Robbery squad, known as SARS, shooting dead a man in Delta state.
Image: Iyawo Thicker Body \ Twitter

Nigerian police used teargas on Friday to disperse dozens of people in the capital Abuja who had gathered to protest at alleged brutality by members of a special police unit, witnesses said.

Protesters, some holding placards, ran as clouds of teargas hung in the air. Multiple people at the incident said on Twitter that police had fired the canisters.

A spokesman for the police did not immediately respond to a message and call requesting comment.

"They poured teargas on each and every one of us, it's so hot I had to put water on my face. This is what Nigeria has turned into," protester Anita Izato said.

"We just got there with our placards and decided, they started throwing us teargas. That was it," another protester said.

Sporadic protests have broken out across Nigeria in recent days after a video circulated last week alleging to show members of the Special Anti-Robbery squad, known as SARS, shooting dead a man in Delta state.

When Divine Umukoro refused to pay police a bribe after breaking Lagos state's night-time curfew, she says they slapped her, slashed her car tyres ...
News
11 months ago

The last decade saw social media, especially Twitter and Facebook, becoming a platform that ordinary people and celebrities used to voice their ...
News
1 year ago

The police pledged to reform the unit soon after the alleged incident, including by banning SARS agents from carrying out routine patrols and requiring them to wear uniforms when on duty. But protesters have called for the unit to be abolished.

Nigerians and international rights groups for years have accused SARS of brutality, harassment and extortion, and there have been multiple pledges in the past, including from the government of President Muhammadu Buhari, to reform the unit.

#EndSARS has been trending on Twitter in Nigeria for several days, popular singer Naira Marley held an Instagram chat with a police spokesman over the issue watched live by more than 30,000 people and even the deputy governor of Lagos state said he had been harassed by SARS agents.

"Every citizen of Nigeria should be upset," Lagos state government spokesman Gboyega Akosile said in a Tweet, sharing a video of Lagos state Deputy Governor Obafemi Hamzat addressing protesters and sharing his own story of harassment.