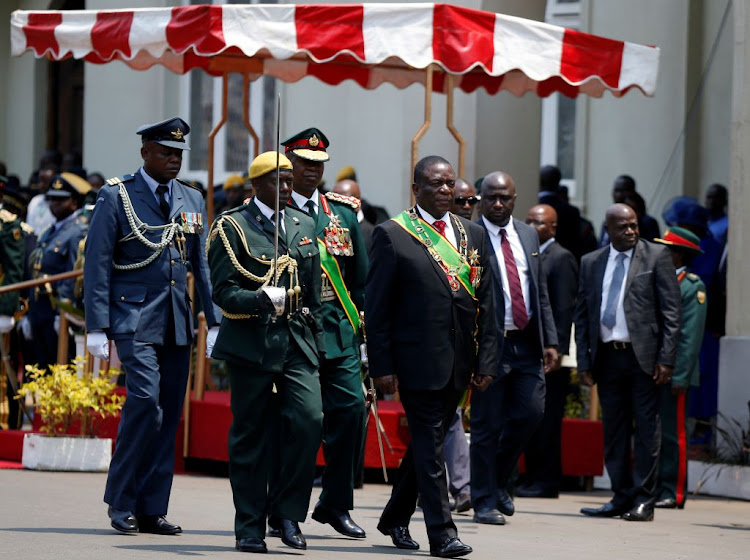 Zimbabwe's President Emmerson Mnangagwa arrives to officially open a new parliament session as well as deliver his state of the nation address at Parliament Building in Harare, Zimbabwe, on October 1 2019.
Image: REUTERS/Philimon Bulawayo

Zimbabwe's President Emmerson Mnangagwa on Tuesday pleaded for time and patience to bring the economy back from the "dead", as his government faces blame for surging inflation evoking dark days under Robert Mugabe.

Hopes that the economy would quickly rebound under Mnangagwa, who took over after Mugabe was deposed in a coup in November 2017, have faded fast with Zimbabweans grappling with acute shortages of fuel and electricity and soaring prices.

In a state of the nation address in parliament, boycotted by the main opposition Movement for Democratic Change (MDC) which disputes his election, Mnangagwa acknowledged the economic crisis as well as the need for reforms.

"I'm aware of the pain being experienced by the poor and the marginalised. Getting the economy working again from being dead will require time, patience, unity of purpose and perseverance," Mnangagwa said.

Zimbabwe has suspended the publication of official annual inflation data since August 1. In its last official figures, inflation hit more than 175% in June, its highest level since hyperinflation under Mugabe wiped out the economy in 2009.

Malema has been credited for assisting the family of late Robert Mugabe to have his wishes honoured.
News
2 years ago

Mnangagwa's opponents accuse him of lacking commitment to political reforms and using his predecessor's heavy-handed tactics to stifle dissent.

Mnangagwa and senior officials say they are doing their best to lay the foundations for future growth and blame Western sanctions for hampering recovery and deterring investment.

A United Nations human rights envoy said on Friday that Zimbabwe's political and economic environment was deteriorating, causing anxiety as hopes fade for a long-awaited improvement in people's living conditions.

In his address on Tuesday, Mnangagwa repeated his commitment to implement recommendations made by election observer missions to Zimbabwe's 2018 election, as well as a commission of inquiry led by former South African President Kgalema Motlanthe.

The observers and the commission had called for broad security, political and electoral reforms.

Mnangagwa, whose election last year remains disputed by the MDC, once again invited the opposition party to dialogue.

The MDC, led by Nelson Chamisa, has refused to take part in a dialogue forum convened by Mnangagwa, insisting on talks led by a neutral mediator.

Zimbabwe's former president Robert Mugabe was buried in a tamper-proof casket because he feared that people would "use my body", according to his ...
News
2 years ago
Next Article