Lies can indicate fear of parents 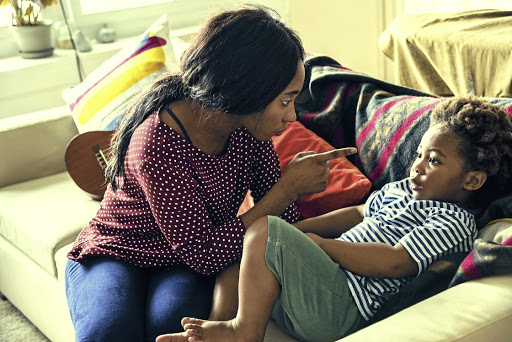 Terrifying your children can cause them to lie to avoid disappointing you or being punished.

Maletsatsi (not her real name) is frustrated with her five-year-old child. She says that he has developed a nasty habit and she has no idea where he picked it up.

"He does it even when it is not necessary. From lying about what they ate at creche to lying about the most mundane things; I would ask him if he has seen the batteries for the TV remote, for example, and he would say he has never touched the remote, only to find the batteries in his playroom, chewn.

"I have tried time out, spanking and even trying to put the fear of God into him - literally - by telling him that daddy God does not like kids who tell lies, and it all does not seem to work.

"I honestly don't know who taught him to lie because I have always been a big advocate of truth-telling with all my kids."

Maletsatsi, 33, who lives in the village of Tlhakong in North West, says that on a deeper level, she fears that her son is scared of her.

Your kid is not your crutch

Do not burden children with your problems.
Good Life
4 years ago

"I don't want to be this monster that he feels he has to lie to in order to avoid being eaten alive. I want him to trust me and feel comfortable enough with me to be honest at all times, despite how uncomfortable the truth may be.

"Nowadays, people molest children and God forbid that someone does something to my son. Will he lie to me about it still?

"Also, raising a boy is hard, and I don't want him to get used to bad habits at this age, only for those habits to double in size when he reaches puberty. What's to stop him from stealing or being a bully if honesty is not his favourite habit now? Am I overthinking things here?"

No, she is not overthinking things, says psychologist Mampho Mofokeng.

"Lying is definitely not a habit that anyone should accustom themselves to, let alone a child.

"But, it's imperative for parents to not go into complete panic mode, especially when the child has not even reached the age of eight.

So, my first batch of advice to this mom would be to calm down, and know that she can still nip this behaviour in the bud," she said.

Spot the signs that show your kid is not like others and support them.
Good Life
4 years ago

Mofokeng explains that lying is a common problem that most parents face with their kids, but she says there are various reasons for it happening.

"When a child becomes cognisant of their surroundings and different people around them, they start to form their perspective of the world and how to relate to different people. An authoritative figure, such as a parent or a teacher, can be seen as quite intimidating by the child, particularly when they learn which buttons to press in order to get them upset.

"Lying, for them, is their way of trying to appease as opposed to trying to do any harm.

"A child at an early age, say 0 to 10, has not developed a strong moral compass, so parents should strive to teach their kids the distinction between right and wrong, should not expect their kids to be little popes who are the pinnacle of virtue."

Constant lying by a child can also indicate an underlying issue that parents need to be vigilant of, Mofokeng warns.

She says that when a parent first learns of their child's lying habit, it is important to rule out the following:

"Lying can be a symptom of grooming by a paedophile. When someone older makes the child keep 'their little secret' about random things like having been given sweets for example, it can be indicative of grooming, and when the predator is comfortable enough that the child is easily manipulated into keeping certain secrets or lying, they can strike.

"Lying can also be indicative of a parent being too abrasive in their parenting style; they believe in scaring their kids.

"If a child knows that you are constantly shouting when they do childish things like spilling their juice ... they will go into defensive mode to avoid the brick house coming down on them.

"So, parents also need to dig within and re-evaluate how they interact with the child. Remember, you catch more flies with honey than vinegar."