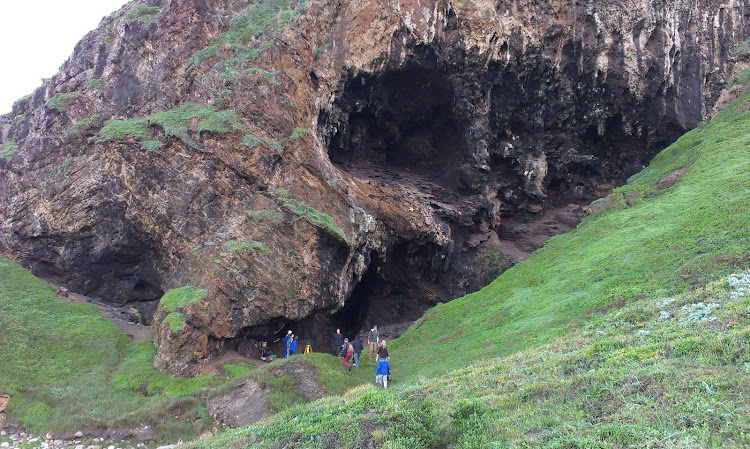 The Klasies River cave near Humansdorp in the Eastern Cape has revealed what early humans ate more than 100,000 years ago.
Image: Wits University

SA has once again proven to be a treasure trove of evidence for anyone interested in our distant past as human beings.

This time, it's not how we evolved genetically but what we ate that is under the microscope.

And that evidence points to a love of all things starchy and a braai to rival any other.

Charred food remains were found in hearths inside the Klasies River cave, which is on the Tsitsikamma coast in the Humansdorp district of the Eastern Cape.

PUBLISHED: Earliest archaeological evidence that anatomically modern humans were roasting and eating plant starches, such as those from tubers and rhizomes, as early as 120,000 years ago. Cynthia Larbey et al #openaccess in Journal of Human Evolutionhttps://t.co/BwHTTsz5Ns pic.twitter.com/dqenw84vML

They had been there for 120,000 years until an international team of archaeologists began looking at what had been cooking.

Their findings led the researchers to conclude that early human beings were "ecological geniuses" and were able to exploit their environment intelligently for food and medicines.

This is the first archaeological evidence which shows anatomically modern humans were roasting and eating plant starches, such as those from tubers and rhizomes.

The discovery is interesting for two main reasons: it shows we were eating starch long before we started farming; and it supports the hypothesis that the genes which help us digest starch were an adaptive response to an increased-starch diet.

"This is very exciting. The genetic and biological evidence previously suggested that early humans would have been eating starches, but this research had not been done before," says lead author Cynthia Larbey, of the archaeology department at the University of Cambridge in the UK.

The study - just published in the Journal of Human Evolution - is part of a multidisciplinary investigation into the role that plants and fire played in the lives of Middle Stone Age communities, according to a statement by the University of the Witwatersrand.

"Our results showed that these small ashy hearths were used for cooking food, and starchy roots and tubers were clearly part of their diet, from the earliest levels at around 120,000 years ago through to 65,000 years ago," said Larbey.

"Despite changes in hunting strategies and stone tool technologies, they were still cooking roots and tubers."

Professor Sarah Wurz, from the School of Geography, Archaeology and Environmental Studies at Wits, is the principal investigator of the site and said the research showed "early human beings followed a balanced diet and that they were ecological geniuses, able to exploit their environments intelligently for suitable foods and perhaps medicines".

By combining cooked roots and tubers as a staple with protein and fats from shellfish, fish, small and large fauna, these communities were able to optimally adapt to their environment, indicating great ecological intelligence as early as 120,000 years ago.

"Starch diet isn't something that happens when we started farming, but rather, is as old as humans themselves," said Larbey. Farming in Africa started onl in the last 10,000 years.

Zio is owned by Alessandro "Alex" Khojane. You might know him as the owner of vibrant Bryanston landmark Gemelli.
Good Life
3 years ago
Next Article