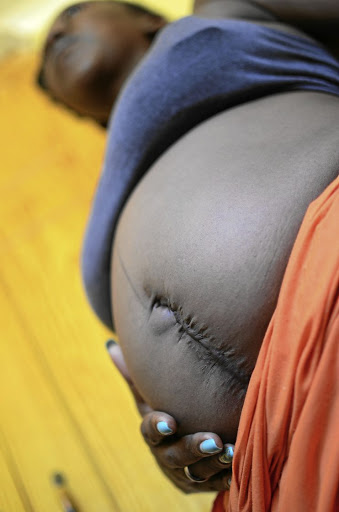 An operation that went bad at Mahikeng Provincial Hospital after a patient gave birth.

A big signboard at the entrance of a North West hospital reads: "No woman should die while giving life and no child should die of preventable diseases".

However, pictures of mothers sleeping on filthy mattresses with their infants inside a maternity ward at Mafikeng Provincial Hospital recently suggested that the facility is far from conducive to health.

When Sowetan visited the area recently, a woman who was leaving the hospital with her newborn wrapped in a blanket said when she first arrived at the hospital there were no beds.

"There was a room with mattresses on the floor and we were made to sleep there. It was dirty. It looked as if they don't clean the ward at all," she said, on condition of anonymity.

Kgomotso Tlhabane, who had gone to visit her friend after the woman gave birth on February 16, said the conditions were shocking.

"I was greeted by an unbearable smell; maternity patients had blood all over and it was bad," she said.

On Friday evening, a woman in a ward, who also did not want to be named, told Sowetan the situation had improved. "They brought in the cleaners to scrub the floors and the toilets. This place was dirty when I got here.

"Now they are even squeezing in more beds," she said.

Department head Thabo Lekalakala apologised for the problems at the ward. He said the overcrowding was caused by the fact that the ward had to accommodate patients from Lehurutshe Hospital, claiming the maternity section was under renovations.

"I am not happy that patients are sleeping on the floor." Lekalakala said they expected renovations at the Lehurutshe maternal ward to be completed next month.

He said the psychiatric ward in Mahikeng would be cleared up to accommodate mothers.

Sowetan also spoke to other locals who said their past experiences at the hospital had been horrific.

Kaone Malope of Montshioa township said she was still living in pain after staff at the hospital allegedly botched her C-section nine months ago.

Malope said her family assisted with money to see a private doctor out of fear that the hospital would finish her off.

"I literally ran away. I was scared that they might kill me this time around," she said.

Nurses who asked not to be named said maternal healthcare in the province was a problem.

He said often they lacked basic things such as medication

"It's not conducive," she said.

The woman also said in some cases they lack immunisation drugs and mothers were told to ask for it at their local clinic after three days.

"Only to find that when they arrive at the clinic, the immunisation is not available," she said. Department spokesman Tebogo Lekgethwane said it was an isolated incident.