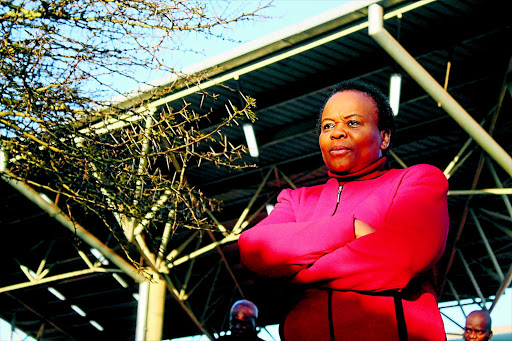 Gauteng health MEC Gwen Ramokgopa has admitted that it is difficult for the provincial government to manage the spread of listeriosis in the province.

On Tuesday‚ Ramokgopa presented a report to the Gauteng portfolio committee on health detailing active plans to deal with the spread of listeriosis.

She told the committee that a number of teams had been set up guided by specialists and experts from the National Institute for Communicable Diseases and World Health Organisation to deal with the spread of listeriosis.

Ramokgopa admitted it has been hard trying to contain the spread of the disease.

“It is not as easy as management of a measles outbreak. With measles we know them and were able to contain within a limited period of time. But this one has been really difficult and that is why we are working with the agriculture sector to make sure that there are no possible areas of risk and infection.

Gauteng is also heavily affected because of the fact that it is a referral centre‚” said Ramokgopa.

The National Institute of Communicable Diseases (NICD) announced that the number of confirmed listeriosis cases was now 852 and 107 people had died‚ the death rate - based on the outcome data for 355 cases - now sitting at 30%.

Of those confirmed cases‚ 42% were babies less than a month old‚ pregnant women being 20 times more likely to get listeriosis than other healthy adults.

Contracted from eating food containing the pathogen listeria‚ listeriosis is the most deadly of food-borne diseases‚ the death rate in other documented outbreaks being up to one in four.

And still the source of the outbreak - thought to be a food product or range of products from one company - remains unknown.

Most cases - 59% - have been reported in Gauteng‚ with 13% of cases in the Western Cape and 7% in KZN; roughly two thirds of cases being confirmed in state hospitals and a third in private hospitals.

In its report the Gauteng department of health said the following was being done to deal with listeriosis:

- a provincial joint operation committee and sub-committees have been established to coordinate the response;

- a communicable disease control WhatsApp chat group on listeriosis was established for officials;

- frequently asked questions and guidelines on management of listeriosis have been circulated to all relevant practitioners in the province;

- regular weekly NICD updates on the outbreak are being forwarded to all relevant practitioners in Gauteng;

- a case management workshop on listeriosis was held from October 19-20 last year at the Birchwood Hotel which was attended by doctors and infection control nurses;

- home visits were conducted in confirmed cases in order to collect food and water samples for microbial testing;

- random sampling and testing of cases from butcheries‚ abattoirs‚ food processing plants continue to be conducted;

There was also a national conference on Listeriosis on February 1 to discuss prevention and control of the outbreak.