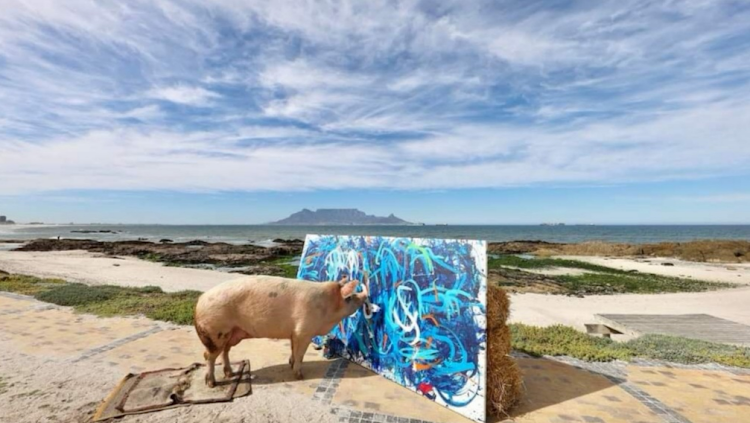 Among the feathers in Pigcasso's cap is a commission by timepiece-maker Swatch.
Image: Supplied

Within 72 hours of its release, the newest masterpiece by SA’s famous painting porker Pigcasso was snapped up by a German art collector for just over R300,000.

It comprises complex blue, green and white acrylic strokes and was completed over a few weeks.

The abstract impressionist has reeled in millions of rand in sales over the past five years and has an impressive worldwide following.

She has brought home the bacon time and again with her works, her own wine label and by becoming the first non-human to be commissioned by Swiss watch giant Swatch to produce artwork for one of its timepieces.

Pigcasso was rescued a month after birth from an industrialised hog operation on the outskirts of Cape Town in 2016.

When Lefson noticed the pig had a knack for the old paintbrushes accidentally left in her stall, she decided to nurture the pig’s interest.

At five years of age and 700kg, she has now created more than 400 artworks and sold the majority of them.

Hot breakout stars to watch in pop culture next year

When it comes to Pigcasso’s latest feat, Lefson said she wanted the animal to create something that had never been done before.

“An oversize, larger-than-life canvas that could challenge the intrinsic value of an artwork created by an animal.”

Lefson said it was motivated by a desire to show “how intelligent and creative animals are”.

“On completion, the work was posted on social media and sold within 72 hours of release. The buyer, a German collector named Peter Esser, has invested in a number of Pigcasso’s original artworks since first stumbling across her story in the German media in 2018.

“There was significant interest in the piece.

“It’s not just a visually striking and beautiful painting, it’s a profound moment for Pigcasso and for farm animals. You can’t look at it and not place greater value on their intelligence, individuality and creativity.”