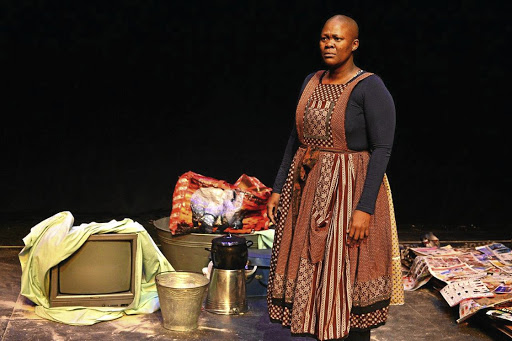 It takes a brave actor who has certain unique qualities to perform a one-person theatre show. The challenge with a one-person show is keeping the audience entertained and commanding the skill to switch between different roles without audiences becoming bored stiff.

Lazy Boy can be viewed virtually on Market Theatre's social media pages. It is part of a concept called Ditshomo Story Time Season that was started during the Covid-19 lockdown to allow theatre lovers to enjoy theatre from the comfort of their homes.

The one-hander show does not come as a surprise to those who watched Sodlaka's performance in one of the country's best classic plays Nongongo where she proved she's got the touch on stage. Her superb performance a hard-to-impress theatre director James Ngcobo, who decided to rope her in for Lazy Boy.

The Eastern Cape-born actress said she was intimidated and scared when she was told about the one-woman show. It became worse when she saw the length of the script when it was presented to her.

"James told me about it, but there is this thing about me that I can't say no. And also, when you get the call, you do trust the person who is calling that he knows something that you may not know."

Idols SA is officially going ahead with a brand-new season despite feeling the Covid-19 pandemic pinch.
Entertainment
2 years ago

Lazy Boy is written by Palesa Mazamisa and directed by Ngcobo.

Agnes is a woman who lives in a shack until she gets caught in a fight with the Red Ants (security firm specialisng in evictions) personnel before educating them about real life issues in the process.

The 20-minute play touches on various issues such as how certain people use fake court orders to harass and forcefully remove people who live in informal settlements, especially during this current Covid-19 crisis after the government had vowed not to evict people.

The play further tackles service delivery issues such as housing backlogs, scarcity of water, broken promises by politicians and Covid-19.

The play was written, rehearsed and filmed in 12 days, but Sodlaka has pulled off an amazing performance.

"Honestly, I do not know how I pulled it off because we had a short time to rehearse. It was basically rehearsed in 10 days.

"It was easier to rehearse at a theatre because it was just the three of us."

Speaking about the show, she said: "People like us who live in brick houses always have opinion and facts and sometimes we stand for or against people who are evicted.

"It was interesting for me to see someone who lives in a shack who is so informed like Agnes. But again, it felt natural for me because as a black person, I come from the culture of studying whether you did not go to varsity or you did, but just can't find a job."

Sodlaka, who also acts on film and TV productions, said it was hard for her to choose which one she loves most. She admits that both TV and stage had a special place in her heart.

"I was watching something yesterday and film is magic and there is something sweet about it. And stage has got a completely different magic about it and there is hole that cannot be filled by anything else, but stage. When acting on stage, people who are with you experience a sacred moment with you."