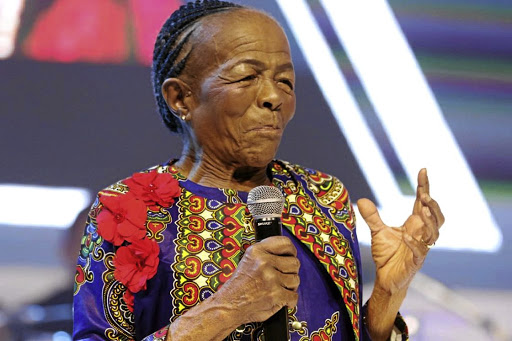 Mary Twala, (80) who has been celebrated for the immense contribution to the arts in South Africa, passed away recently.
Image: Supplied

After the deaths of Mary Twala, Welcome Msomi, Patricia Majalisa and Amapiano producer Vusi Mabuza, the local performing arts industry continues to mourn more actors and musicians in the past six days.

Some creatives have died due to Covid-19 while others have died of natural causes. The most recent deaths in the performance arts industry include casting director Monyeenn Lee, actors Elize Cawood and Duma Mnembe, gospel singer Cyril Mbongwa, and radio drama actor Mfanafuthi Khumalo.

Mnembe, a legend of TV and stage, died on Friday after collapsing at his home in Mzimhlophe, Soweto. The 65 year old is known for his role in the drama series Hlala Kwabafileyo as Bheseni and also portrayed the role of Lefty in Velapi. According to friend and theatre director Julian Seleke-Mokoto, Mnembe will be buried on Saturday with the 50 people Covid-19 regulations allowed. A memorial service has been organised for artists to bid Mnembe farewell and will take place on Thursday at Walter Sisulu Hall in Mzimhlophe at 2pm.

“The memorial service will also be a first come, first served situation and once we have 50 people inside we will close the doors,” Seleke-Mokoto said.Seleke-Mokoto said he has known Duma for years having worked with him in his theatre show Shattered Dreams, a play that tackles the issue of gender-based violence.

Legendary South African casting director and agent, Moonyeenn Lee  has passed away due to complications caused by Covid-19.
Entertainment
2 years ago

The star passed away in hospital on Wednesday morning.
Entertainment
2 years ago

“I remember the way Duma was so good in his portrayal of the role that women wanted to beat him up after the performance. He was very humble and disciplined as an actor. He was very professional and had a lot of respect for his colleagues.”

Stage and Tv legend Mabutho Sithole, who went to Orlando High with Mnembe, said he was a custodian of African theatre who made sure that a proper African narrative was well communicated and accurately communicated to the audience. Sithole defined Mnembe as a very passionate actor who enjoyed the stage more than TV.

"To those he directed he was difficult person to please, something that I feel he got from Bra Gib [Gibson Kente]. Duma paid attention to the interpretation of the script and delivery.”

Born in Mzimhlophe, Mnembe first appeared in a school drama Crime in Soweto while he was still in high school. He also acted in stage plays such as How Long, Sekunjalo, Boklied, Maru, Smallholding, and Shattered Dreams among others.He had a role in Gavin Hood’s film A Reasonable Man in 1999.

Mbongwa, who had 10 albums under his belt and died on Friday after suffering from flu for two weeks, will be buried on Thursday.