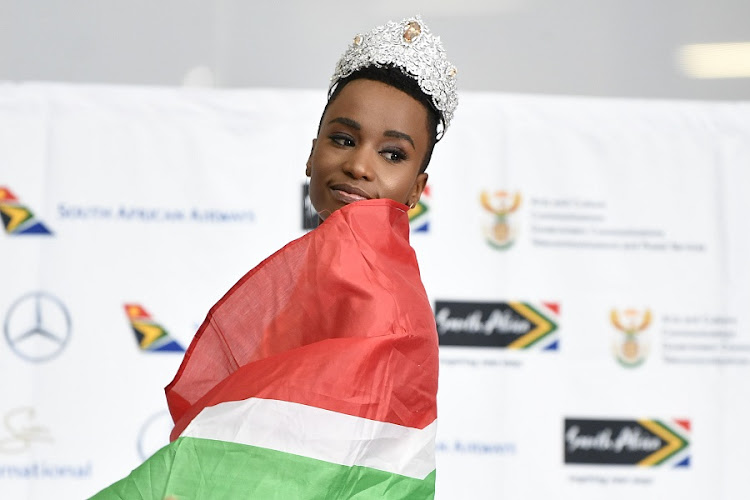 Many of us may avoid our old classmates like the plague if we see them in public, but Miss Universe was over the moon this week when she met some of her former school friends.

Zozibini Tunzi was visiting her former primary school, Canaan Academy in Dutywa, Eastern Cape, on Monday, as part of her homecoming tour.

She spoke to pupils and shared snaps with some of the school's grade ones.

But one of the cutest moments was when Zozi met some of her friends from grade one, about 15 years ago.

In a video, Zozi went into full-on stan mode as she excitedly hugged her former classmates.

Commenting on the moment later, she said she had not seen some of the people in years.

“When you haven’t seen people in about 15 years,” she wrote on Twitter, with a heart emoji.

Zozi returned to SA on Saturday for the first time since winning the Miss Universe title in December.

Hundreds of well-wishers greeted her at OR Tambo International Airport in Johannesburg and, later, at Mthatha airport.

Screams and tears flowed as fans packed the streets to welcome her home. She will embark on a street parade through Johannesburg on Thursday.

Speaking on her homecoming, Zozi told SowetanLIVE sister publication TshisaLIVE: “There is no place like home. No place like SA. I feel like this is where I gather my strength. So being home is like having a renewed spirit in me.”

Here's what went down at the Miss Universe parade in Joburg

South Africans came out in their numbers on the streets of Johannesburg to get a glimpse of SA's sweetheart Zozibini Tunzi at her Miss Universe ...
Entertainment
1 year ago

The dress, the sash and a private entrance with Ramaphosa: Zozi at Sona

Newly appointed gender-based violence (GBV) ambassador Zozibini Tunzi will attend the state of the nation address (Sona) in parliament on Thursday.
Pic of The Day
1 year ago

We love our Miss Universe, Zozi, but other women are also flying the flag high abroad.
S Mag
1 year ago
Next Article