Sona : Finding solutions to SOEs set to be the key focus 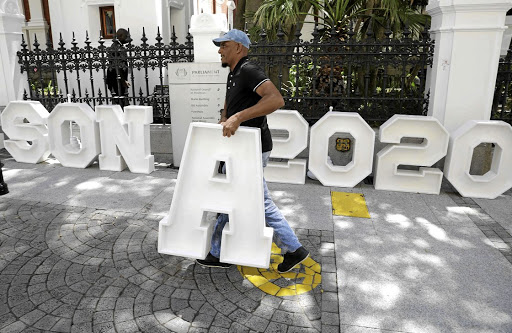 Preparations are ongoing outside the National Assembly for the State of the Nation Address in parliament tonight./ ESA ALEXANDER

The occasion in parliament in Cape Town will be attended by former presidents Thabo Mbeki and Kgalema Motlanthe, and Miss Universe Zozibini Tunzi.

Siya Kolisi, who recently led the Springboks to a World Cup win, will also be among the president's guests. Sinoyolo Qumba, a Grade 11 pupil from the Gibson Pillay Academy in Lenasia, south of Johannesburg, who helped Ramaphosa draft his speech yesterday, will also be in the gallery.

Ramaphosa will be ushered in by a 19-year-old imbongi (praise singer), Masingita Shibambu, when he walks into the National Assembly.

South Africans can rest assured they will have the lights on for the state of the nation address (Sona) on Thursday - at least according to Eskom.
News
1 year ago

During his speech, Ramaphosa is expected to make pronouncements on installing capable people with adequate qualifications in government positions.

When he takes the podium this evening, Ramaphosa will also bring the nation into his confidence about the measures he is planning on putting in place in dealing with the issues faced by state-owned entities.

Ramaphosa's spokesperson Khusela Diko yesterday said the president would also table a plan to implement decisions taken by the ANC at its Lekgotla, which includes retaining the struggling SAA as a national airline, looking at other sources of energy to assist the ailing Eskom as well as partially privatising some of the parastatals.

"The president will deal with the state of state-owned enterprises and will spell out what the governing party and administration see as the way forward for SOEs that have a vital role to play in the country's development and the growth of our economy," Diko said yesterday.

"In order to have a functional government, Ramaphosa strongly believes in installing people with necessary skills sets."

The presiding officers Thandi Modise and Amos Masondo on Tuesday said that they were security measures in place to ensure that the president’s ...
News
1 year ago
Next Article