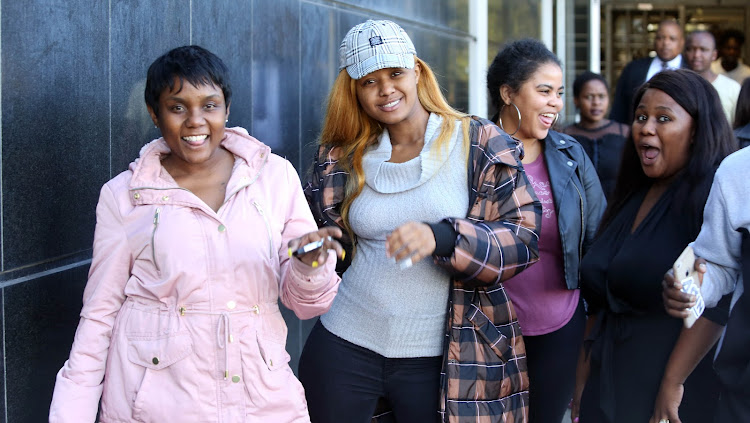 Babes Wodumo with co-accused Tipcee and her sister, Nondumiso Simelane, outside the Durban Magistrate's Court after assault charges were withdrawn against them.
Image: THULI DLAMINI

Gqom queen Babes Wodumo did a happy dance outside the Durban Magistrate’s Court on Thursday after common assault charges against her were withdrawn.

Babes, whose real name is Bongekile Simelane, her sister, Nondumiso Simelane, and musician Tipcee appeared briefly in court, where the prosecutor told magistrate Jackie Jonck that the matter had been resolved through alternative dispute resolution.

The complainant in the matter, Nelisiwe Zulu, who was believed to have been at court earlier in the day, was not present when the charges against the three women were withdrawn.

The assault charges they faced related to an incident at a guesthouse in Umbilo, Durban, in March.

National Prosecuting Authority (NPA) spokesperson Natasha Kara did not go into detail about the agreement that was reached between the four women.

"The matter or the charges against the accused were withdrawn. This is because the complainant and accused have come to some sort of resolution through ADR."

The singer didn't respond to queries from SowetanLIVE's sister publicaton TimesLIVE about the resolution.

Meanwhile, Babes is expected back in court, this time with estranged boyfriend Mandla "Mampintsha" Maphumulo in connection with the assault case Babes opened against Mampintsha in March.

While they remain mum on the state of their romantic relationship, the pair recently performed together in Durban.