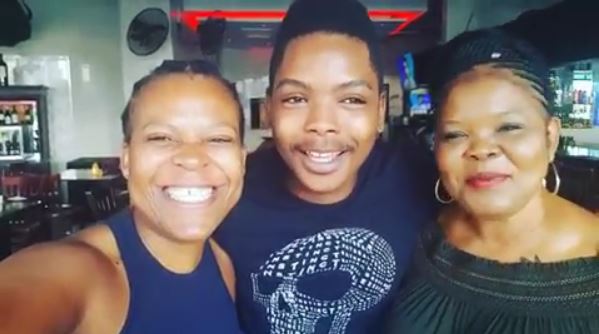 Zodwa Wabantu, with her boyfriend Ntobeko and his mother Khanyo came out to shut down rumours of not getting along.
Image: Instagram/Zodwa Wabantu

Zodwa Wabantu and her fiancé are going to tie the knot, come what may, but one thing the dancer felt a need to quash were the rumours that she and her mother-in-law were at loggerheads. As it turns out, all is well between Zodwa and Ntobeko's mom.

Taking to Instagram, the trio decided to end the speculation once and for all.

"I know it's been said that I actually don't know how to speak for myself and I'm mute or what not, but here I am going to speak because I am actually standing with my two queens; my mother and my queen. The mother and the bride," Ntobeko said.

"Yeah, so please stop saying nasty things about us like 'I'm Ntobeko's mother' or that 'We don't know each other'. Don't come at me," Zodwa said, to which Ntobeko's mother added, "We are together."

Talking to SowetanLIVE's sister publication TshisaLIVE, Zodwa said although her relationship with Ntobeko's family would be fully displayed in her upcoming reality show, she wanted to put to bed once and for all rumors that she and Ntobeko's mother don't get along.

She explained that Ntobeko's mother knew that she loved her son and, as a mother, all that she wanted for her son was pure happiness.

"We are cool, we totally okay me and her. We don't see each other all the time because of our schedules but when we do, we have a good time. She loves her son and I understand because I also love her son. His happiness is very important to me and that's how Ntobeko's mother feels. As long as her son is happy, she's happy and we are very happy," she said.