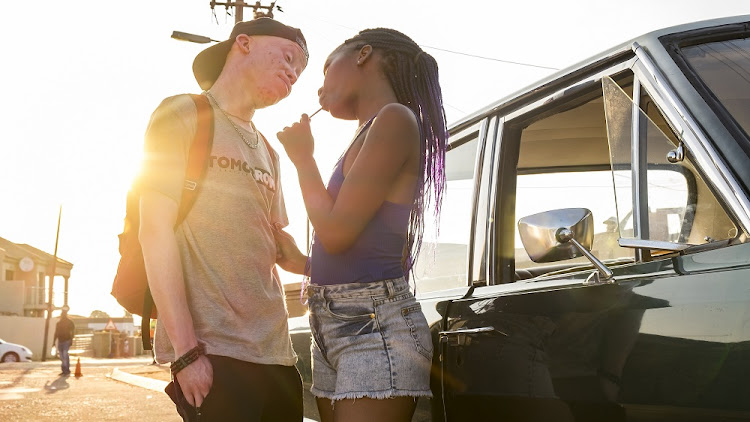 From the mind of comedian turned director Kagiso Lediga, comes the story of two young men from Atteridgeville, who go on an a coming of age adventure.

Lefa (Sibusiso Khwinana)  and Papi (Tebatso Mashishi)’s story is a visual and audio feast with popular music from Black Coffee , Khuli Chana and Dj Mujava  amongst others providing the perfect musical background.

In the course of a day the two protagonists’ triumphs and troubles are perfectly narrated by three Kasi orators, known to most of us as the drunks that sit on the curbside.

Another notable mention is that of famed Pretoria comedian Thapelo “Tips” Seemise who was known as ‘Shampoo’. He makes a stellar appearance in the film.

Matwetwe is a clever comedy, where drug dealing and the troubles of drug dealers follow our hustling quick thinking duo. It also happens to be an endearing tale of friendship and the often-shocking truth of hood living.

It was refreshing to watch a Kasi story that didn't involve Soweto or Umlazi anywhere. The beauty of pitori slang!

SowetanLIVE caught up with Lediga to ask him a few questions on the film.

Lediga had been sitting on the idea for the story since his days in university. The idea occurred to him; he wrote it down and then promptly forgot about it.

“I just wrote it on a notepad and at the time I was just this young guy smoking a lot of weed and I wanted to kind of do a coming of age story set in Atteridgeville. I thought it  would be a cool thing to do and then it kind of just you know, years went by… and  I discovered it as this old piece of paper, maybe 4 pages,  then I thought to write that as a script.”

Lediga cast Khwinana and Mashishi from the South African State theatre in Pretoria.

Impressed by their fit and talent he also wrote them into the story after meeting with them.

Lediga wrote some of the roles into the story after meeting the actors.  He mentions that he was particularly apprehensive about the three narrators who are so pivotal to the story.

Within three weeks they had started shooting the film, Lediga states that it took about nine days to shoot which was a very short time. His first feature film Catching Feelings took about 18 months to make.

“We shot this movie 6 months later, 6 months after 18 months of making a movie; we shot another one in the space of a month,” he explained.

Having watched the film we mentioned that the language used though refreshing was a little harsh and might not be well received as one of the characters speaks about women in a derogatory manner.

“It’s how it is, it’s how people speak, I wasn’t going to mollycoddle. It’s a specific type of comedy and Lefa calls Papi out on it. That type of masculinity exists in the hood and those types of characters speak like that. So I think if the language had been couched in sort of niceties it wouldn’t resonate with the people,” he said.

The movie contains a number of shocking moments which many people who’ve lived in any township in this country have come across. This allows the viewer to feel like they know the story. There is also an element of quirkiness familiar in popular coming of age flicks like Dope and Super Bad which Lediga admits to having ‘looked to’ as visual references.

He also went on to explain what differentiates Matwetwe from Catching Feelings.

“This one was a lot more instinctive, Catching Feelings was a lot more scripted, prepared you know. Whereas with this it was more of a feeling even the way we shot it, it was so quick.”

“There was a lot more of instinct to it,” he adds.

Matwetwe premiered at the Fantastic Fest in America and also showed at the International Film Festival Rotterdam in Europe and lastly in South Korea. The film received positive feedback across the board.

“To see it resonate with audiences across the world in that way was quite cool. Everybody was like we all know these people,” he said.

Lediga is really keen on making movies that people want to watch and find relatable.

“I’d like to think of myself as a commercial film maker, I like to make films that people will want to go watch on dates or as fun things you know but also ones that ring true to life,” he added.

Musician Black Coffee is the executive producer of the film.

Lediga urges the public to go out and watch the movie as film house owners and distributors are often reluctant to take on films such as these.

To stand a chance to attend SowetanLIVE's screening of the movie at Maponya Mall enter below.