Bra Hugh LOVED his Africa right to the very end 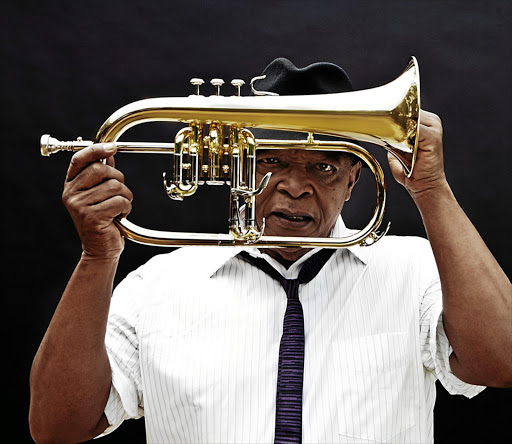 In August 2017, at the Mzansi Magic Viewers' Choice Awards, Bra Hugh Masekela was awarded with a Legend Award and given the opportunity to do a live performance on stage.

This would be the last time the majority of South Africa would see the legendary musician perform. He died the following year in January, aged 78.

While making the crowd sing along to his melodic Marketplace, Bra Hugh took a moment to leave some pearls of wisdom on stage.

This was random for fans watching at home, but for us in the audience, we knew that he was referring to the timer that had just gone up to indicate that he was "over" his set time.

Classic Bra Hugh, he put them back in their lane.

Then, somewhere in that inspirational brief speech, he said the F-word and won my little heart over.

It wasn't because he had said that word on live television (which was just rockstar moves), it was because he knew who he was and he wasn't apologetic about it.

Just as his awards was etched he was a legend and if he wanted to stop mid-song to tell a story that had life lesson embedded in it.

He would do it because well... you can't rush the sun.

Read all about the gifts in the form of life lessons that Bra Hugh left me with to share.

Bra Hugh didn't need to do media interviews, everyone knew that... his music, accolades and contribution to the dream of a rainbow nation spoke volumes.

So it is for this reason that I will forever consider it a blessing that I got the privilege to interview Bra Hugh for SowetanLIVE for two hours in July last year.

Walking into the Regency Hotel in Rosebank, Johannesburg I was a nervous wreck... I still could not believe that I managed to secure an interview with Bra Hugh Masekela... thee legendary musician!

When we (my colleague and I)  arrived at the hotel Bra Hugh's manager,  Josh Georgiou asked that we give them a few extra minutes to wrap up a business meeting and wait for the star to have lunch before we spoke.

I called my editor, reporting that the interview would start later than scheduled, but I wanted to wait. I am glad I did.

On Tuesday January 23, South Africa woke up to the devastating news that Bra Hugh had died after his long battle with prostate cancer.

After the initial overwhelming sadness slowly subsided, I realised that I was one of the lucky few that got the chance to drink from his well of wisdom.

Listening back to the voice recording of the interview, my nerves are clearly audible but only now do I realise how Bra Hugh also picked that up but decided to be patient with me.

During our two-hour interview Bra Hugh imparted more wisdom and knowledge than I asked for, and I will forever keep that in my heart.

I believe that these were lessons, not only for me but for his beloved Africa.

In the last few years, Bra Hugh made sure people knew exactly where he stood as far as weaves‚ land and language was concerned.

He proudly called himself "heritage captured" and explained that his resistance to things like weaves was because he believed Africa (and its cultures and heritage) was endangered.

The legendary musician said he was heartbroken and embarrassed by how far we had gone from who we are.

"Our history and heritage is the richest in the world and humanity and civilization started with us, so it's so embarrassing for me to find us where we are today. So I am now obsessed with imparting it, it's my duty."

English is a great language, but Bra Hugh emphasised that we needed to do everything in our power to avoid the death of our mother tongue.

"In fact there are children and adults today that are unable to construct a mere sentence in their mother tongue. It is very important to revive the knowledge of all those things."

Bra Hugh knew that "to whom much is given, much is required" aka pay it forward.

"I don't feel deserving of anything. I feel I owe. Because if I came from Japan I would have been a sushi chef or something. But I came from who I came from and that's why I am what I am."

And, towards the end of our interview, right after I reminded Bra Hugh that he would be turning 80 soon, he shared the secret of life.

He highlighted the danger associated with inflated egos.

"I think once you get too involved with your legacy and all that sh*t, you are swallowed by your own ego."

While I, like the rest of the world will celebrate his life and cherish the music he's gifted for over six decades, I will now be striving for more.

I want to live in an Africa Bra Hugh wanted.

The Africa he loved enough to decline citizenship in many "first world countries" just so he could return.

The Africa that isn't ashamed to embrace all it is and to show the world it's true colours.

I hope we become the Africa you will be proud to look over Bra Hugh. Rest in perfect peace.