Plan for crisis, don’t wait for it to happen - sage advice from bank executive

I was taught the value of making the best use of what you have, says Himal Parbhoo, CE of cash investments at FNB 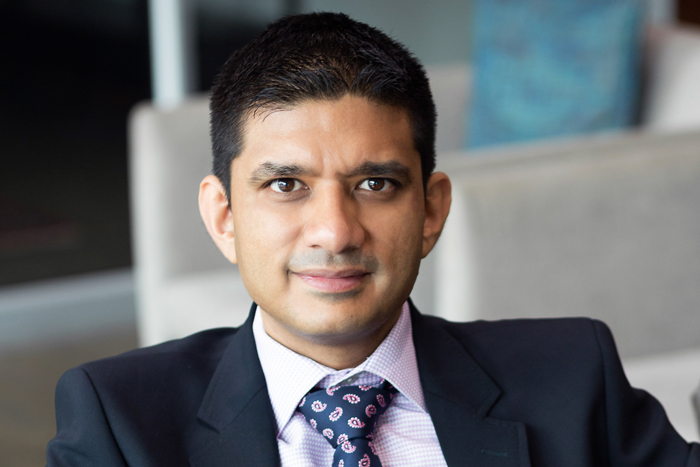 As part of the Money Habits series, Parbhoo opened up to us about an upbringing that has shaped his relationship with money and set him up to succeed.

Born to a doctor and home executive, he’s the youngest of three sons and was raised in a tight-knit family. Parbhoo grew up in Nigel, a small gold mining town on the East Rand, where he lived next door to his cousins.

“My mom taught me the principles of saving. She might not have spoken about it, but she modelled it. She managed the household very efficiently. Finances were tight. We didn’t just spend. It was an event to eat out and buy clothes.

“I was taught the value of making the best use of what you have. My mom would say, ‘We don’t waste food’ and that taught me about not wasting. I don’t waste money.”

After school Parbhoo obtained an honours degree in actuarial science from the University of Pretoria and after a brief stint at Liberty, he joined FNB.

He’s been with the bank for 14 years, having held down various positions from the head of credit and analytics – managing the credit risk linked to consumer transactional accounts, namely overdrafts, revolving loans, and temporary loans – to being part of the treasury team, where he gleaned a better understanding of how the bank raises money from deposit-taking products.

He says as soon as his position with FNB became permanent in 2006, he set up his first debit order into a unit trust. “It was into the Allan Gray Equity Fund, which I still invest in. I’m also invested in the Allan Gray Balanced Fund, the Coronation Equity Fund and in Satrix ETFs.”

I’d like to have understood more about shares when I was younger. Investing in shares is not for the preserve of the rich. Think about what it means. It allows you to own a share in a company.

He says that if he has one excellent money habit, it is the discipline of paying himself first via automation. Come month end, when the money leaves his account, it feels like he’s living pay cheque to pay cheque, but it’s worth it.

“My dad and my uncle have a basic understanding of money compared to what I’ve learnt. Just knowing about unit trusts as a young person starting out gave me an advantage and I’ve often thought, ‘What if my father had known this when he started working’.”

He says that if he has one regret when it comes to money it’s that he didn’t start investing in shares when he was younger.

“I’d like to have understood more about shares when I was younger. And I was too conservative. Investing in shares is not for the preserve of the rich. Think about what it means. It allows you to own a share in a company.

“When I consider what FirstRand shares cost when I started working at the bank compared to what they are worth now, I should have bought ten shares back then. People always talk about Capitec. Why can’t we have a piece of that [profit]?

“We must change our mindset. Most people aren’t born rich. They’ve worked and sacrificed a lot to grow wealth. We look at people at the end stage instead of their entire journey.”

To obtain his degree, he had to spend years studying and sacrifice a lot. But in the end he was rewarded for it. “My wife had to carry our baby for nine months and endure the pain of labour. Why don’t we apply that thinking to our finances?”

He says that while South Africans know how to save, we’ve become a nation of consumers, subject to enormous social pressure, and this leaves you with nothing left to save.

Parbhoo says although his father wasn’t a sophisticated investor, he knew about putting money away. “My dad took out policies for our education.”

Now that he is a father of a daughter who will be four months old soon, he says he hopes to resist the urge to give her too much. “My parents taught me about patience and delayed gratification. I want to instill that in her from a young age, rewarding her for patience. It speaks to savings.

THE MAGIC OF COMPOUN

“You can have R100 today or R110 in a year if your money grows by 10% and then it will continue to grow and grow. If I can teach her that she will eventually understand compound interest.”

Describing his relationship with money as friendly, he says, “It enables me. From my days of working in credit I’ve seen horrors that come from a lack of discipline with money.”

This doesn’t mean he hasn’t made his share of money mistakes. He says his worst investment was in Steinhoff, although that hasn’t put him off investing.

“After years of investing in unit trusts, I decided to do some stock picking. A portfolio manager I know advised me to invest in Steinhoff and within months it crashed. If I had kept to unit trusts, I wouldn’t have lost that money.”

Parbhoo’s advice to readers is: plan for a crisis. Don’t wait for it to happen. “Start saving today.”

The South African banking sector’s first black woman CEO opens up to Money about the value of education and how money can buy everything, including ...
Business
2 years ago

From odd jobs to CEO of digital bank

Hailing from the neighbourhood of brightly painted houses in one of Cape Town’s most photographed communities, TymeBank's CEO recalls money lessons ...
Business
2 years ago

Ashburton CIO had to stretch resources on way to the top

Understanding that money is a useful but finite asset that requires considered decision-making has been one of Ashburton Investments CIO Nkareng ...
Business
2 years ago
Next Article