Jobs bloodbath looms as stoppage due to pandemic starts to bite 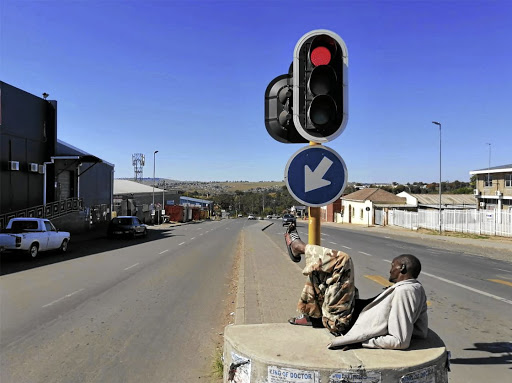 Mxolisi Lugano of Ngangelizwe takes a rest at the intersection of Nelson Mandela Drive and Madeira Road in Mthatha. /LULAMILE FENI

SA is facing a massive jobs bloodbath with dozens of companies across various sectors serving employees with retrenchment notices.

Some of the section 189 notices were served on workers last week with companies blaming the suspension of operations due to Covid-19 for plans to cut thousands of jobs.

Cabinet held a special meeting yesterday where discussions centered around the stimulus package and protecting jobs across sectors.

Mining unions, which were served with section 189 notices during the national lockdown, told Sowetan a number of other retrenchment notices were received prior to the lockdown.

One of the companies, Vaal Main Reef, which employs more than 6,300 employees, gave notice to its employees on Friday, indicating that it was experiencing "significant economic stress" which will force it to shed jobs.

The company announced that its three mining operations - Tau Lekoa mine, Kopanang mine and West Gold Plant - needed urgent restructuring.

The Jolly Roger, a pub in Parkhurst, northern Johanessburg, raised R109,000 by April 20 through a crowdfunding drive to pay staff during the lockdown ...
News
2 years ago

Small business owners are already feeling the pinch as coronavirus cases rise in the country.
News
2 years ago

These losses, without restructuring of the workforces supporting these mining operations, are unsustainable," read the notice.

Kangra Coal in its notice served on workers on Thursday stated that it was "foreseeing" a loss of all its 428 employees due to, among others, depleted coal and effects of Covid-19 on operations and markets.

Last week, the embattled SAA served all its 4,700 employees with retrenchment notices. Several other mining companies have also told unions that they will be forced to cut jobs.

The National Union of Mine workers (NUM) described two recent notices from Vaal Main Reef which affected its three operations and another from Kangra coal received two days apart last week as "opportunistic."

NUM spokesperson Livhuwani Mammburu said: "We are rejecting both section 189 notices. They are opportunistic by taking such decisions, they must allow organised labour to come back to engage on how to save the mines. NUM will not entertain any section 189 notices even after the lockdown."

York Timber in Mbombela, Samanco and Manganese Metal Corporation (MMC) have all began consultative process as they prepare to shed jobs.

"We were supposed to start the consultative process with MMC this week, but I've asked for it to be postponed due to the Covid-19 lockdown because we are a mandate-driven union, so we will not be able to consult right now," Tau said.

One of the biggest unions at SAA has slammed a proposal to terminate the entire workforce of the crippled national carrier, saying a document from ...
News
2 years ago

Don't offer to leave your job amid Covid-19 pandemic

Think thrice before volunteering for retrenchment. Some employers and employees of companies forced to close during the lockdown are contemplating ...
Business
2 years ago

Economist Duma Gqubule said yesterday's cabinet meeting would among others discussed a R1tn stimulus package which included injecting more money into the economy.

The stimulus package, according to Gqubule, would be used to protect jobs, top up social welfare grants, inject cash to households by giving R1,000 to individuals, as a wage subsidy, increase food parcel distribution to cover two million people a month and also be used as a credit guarantee schemes for small and medium enterprises.

"We need to put aside issues of affordability because there is no point in worrying about budget deficit while your people are starving," Gqubule said.

"It makes no sense whatsoever. You have to do whatever you can, whatever it takes for people to survive. You can't have a situation where people die of starvation before they die of Covid-19," he said.