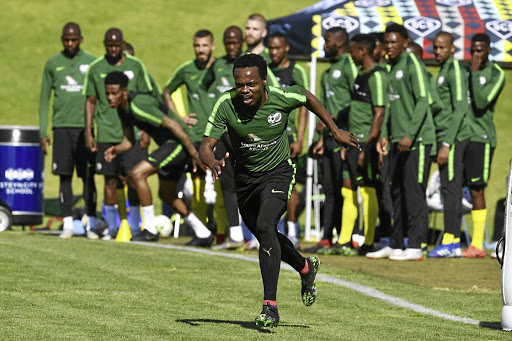 The countdown to the Africa Cup of Nations (Afcon) kick-off on Friday has begun, but Bafana Bafana will be in action three days later when they take on Ivory Coast in their opening game in Cairo next Monday.

Bafana will be looking to beat the odds to overcome a shambolic preparation process in which they failed to secure a friendly game in SA and had to delay their arrival in Dubai during the week.

The star-studded Ivorian squad includes European-based players such as Nicolas Pepe, Wilfred Zaha and Wilfried Bony. Bafana coach Stuart Baxter admits it won't be easy against the West Africans at the Al-Salam Stadium.

"If you look at the opponents we have, I read that Pepe was going to be bought by Bayern Munich for £70m (R1.3bn) and Zaha was going to sign for Man United for £35m so that is about £105m worth of players and that is just two of them," said Baxter.

"To think we are going to have any easy day is not going to happen. But I don't think the players will be intimidated.

"We respect our opponents, but when we are on the pitch the players will do everything to ensure a good performance."

Before that Group D encounter Bafana will test themselves in a friendly against Angola in Dubai on Wednesday.

The pride of the nation lies on the shoulders of the 23-man squad that Baxter announced last week. The attack will be spearheaded by strikers Percy Tau and Lebo Mothiba.

The strike duo are the hope of the nation and they will have to perform well if the team is to stand any chance of making it out of the "group of death".

"We have two strikers who have goals in them. In the practice match, Lebo scored four and all the players have seen him as very difficult to handle. If we can get Percy on the ball in the right areas he will be a threat," said Baxter.

The opener will see Egypt face Zimbabwe on Friday.