Who are the men entrusted with the responsibility of flying SA flag in Egypt? 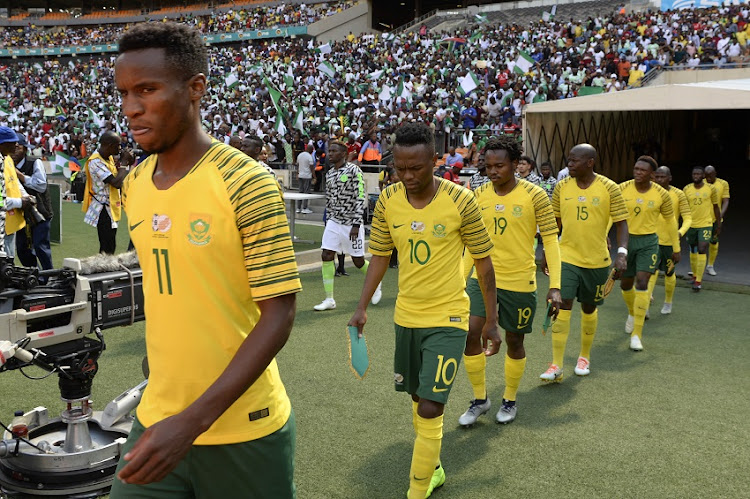 Bafana Bafana are aiming to do well in the 2019 Afcon.
Image: Lee Warren/Gallo Images

South Africa coach Stuart Baxter has named his 23-man squad for the Africa Cup of Nations (Afcon) in Egypt with few surprises in the selection as he goes with the tried and trusted.

Only five of the squad have played at the Afcon finals before though‚ so there is not much experience at this level.

TimesLIVE has compiled a handy guide to each of the players that will aim to lift the trophy for a second time in the June 21-July 19 tournament.

Very much the third-choice goalkeeper in the squad‚ Bvuma is being taken along for the experience‚ which suggests he is seen as a future number one.

Has previously played in the CHAN qualifiers and the Cosafa Cup‚ all in 2017. He is coached by Baxter’s son Lee at his club‚ Kaizer Chiefs.

After his performance in the vital away match against Libya that sealed Bafana’s qualification for Egypt‚ it is likely that Keet will get the nod to start against Ivory Coast on June 24.

Counting against him is that the fact that he sat on the sidelines for much of the closing months of the season at his club BidVest Wits.

Played against Algeria in the 2015 Afcon finals but had a poor game as the side lost 3-1.

Has only ever played one competitive game for South Africa – a 2-1 loss to Cape Verde in the World Cup qualifiers in 2017.

His other five appearances have all been friendlies‚ including a horror debut when the side were thumped 5-0 by Brazil.

Has only kept a clean sheet in one game for Bafana‚ against New Zealand in 2014.

Has won just two caps since making his debut in 2015 but has been rewarded for a solid season with Kaizer Chiefs after a rough start.

Would be a surprise if he is given the nod to start at the Afcon finals.

Has established himself as the first-choice left-back and will likely keep that role going into the finals.

Enjoys getting forward and can supply some excellent balls from wide areas. Is a back-up in the centre-back positions as well. Plays for BidVest Wits.

The captain of the side and very much the leader at the back‚ Hlatshwayo will be a key man in Egypt as the Bafana defence comes under pressure.

Chips in with the odd goal from set-pieces‚ but will want to make up for his last Afcon finals experience where he scored an own goal in a 3-1 loss to Algeria in 2015 and then limped off after 30 minutes against Senegal in a 1-1 draw in what was a horror tournament for him.

The usual back-up to Hlanti‚ he did feature in the vital win over Libya in March when the side changed shape to a back-three and he was used as a wing-back.

It is a tactic that coach Baxter could use again.

Made his debut in the Cosafa Cup while still with Thanda Royal Zulu‚ but now plies his trade with Orlando Pirates.

Will vie with Ramahlwe Mphahlele to start at right-back and is perhaps a more potent weapon going forward‚ where he can be an important part of the attack.

Can be caught out defensively and faced a baptism of fire when he was thrown into the World Cup qualification campaign in 2017‚ including the twin losses to Senegal‚ but would have learnt much from those experiences.

Has been part of the national team set-up for six years‚ but only really established himself in the team in the last 12 months.

Partners Hlatshwayo at club level with BidVest Wits and they have been a consistent centre-back pairing down the years.

Played in five of Bafana’s six qualifiers‚ including the crucial Libya game.

Was the established right-back for much of the last three years‚ though now faces greater competition from Mkhize.

Solid campaigner who is defensively solid‚ he does get forward but perhaps not with the same explosiveness as his rival for the position.

The Kaizer Chiefs man can also play as a centre-back.

Experienced campaigner who will be appearing at his third Afcon finals after 2013 and 2015‚ where he captained Bafana at the latter tournament.

Is a hard-worker in the midfield engine-room‚ a lot of which goes unnoticed‚ and is one of the first names on Baxter’s team-sheet.

The SuperSport United man will play a big role in Egypt.

Kekana is coming off a season where he played 50 times for his club Mamelodi Sundowns‚ which shows his consistency and value to the club.

He has not been able to translate that into national team caps having played 27 times since his debut in 2011 and never in the Afcon finals.

The kind of dependable player you know will do a good job when asked to play.

Maboe has had a good first season at Mamelodi Sundowns‚ which has catapulted him into the national team frame.

A goal-scoring midfielder‚ he will likely be a squad player at the Afcon finals‚ but can be useful in a number of positions.

His three national team goals all came in the Cosafa Cup last year.

Another solid‚ dependable campaigner‚ Mabunda is unlikely to be a starter in Egypt unless there are injuries‚ but has a great understanding with Kekana after enjoying continental success together at Mamelodi Sundowns.

Brings stability to the midfield.

A player often ignored by previous coaches despite excelling in Europe‚ he appears to have won a regular place under Baxter and is hugely valued at English Championship side Brentford.

Just 15 caps in seven years since his debut is frankly quite odd‚ while he will also be making his Afcon finals debut in Egypt.

Another player with not nearly as many caps as he might have had‚ Serero has at times been his own worst enemy and barred from the national team‚ but is now back and ready to contribute.

A highly versatile player‚ on his day he can be the man that pulls the strings in attack‚ but could battle to get a first team place.

Played three games in the 2013 Afcon finals‚ but was not included by former coach Shakes Mashaba in 2015 in what was a surprise omission.

A highly-gifted midfielder who has battled with injuries in recent years that has curtailed his national team performances.

If fit then a likely starter for Bafana‚ but having missed most of this past season‚ could be down the pecking order.

Debuted for the side in 2013‚ but has yet to feature at the Nations Cup‚ despite making the squad in 2015.

Among the most naturally-gifted South African players of his generation‚ Zwane is a top pick if fit and adds much to the left-hand side of the South African attack.

He will perhaps admit that he might have more goals‚ and caps‚ by now. He has yet to feature in the Nations Cup finals.

Coming off an excellent season with Orlando Pirates‚ where he was named South African Footballer of the Year‚ Lorch is not an automatic selection for Bafana and could well be more of a squad player in Egypt.

Can play anywhere across the front line‚ and last featured in the 1-1 draw with Nigeria last November.

The find of the last season for Bafana‚ Mothiba has quickly established himself as a first-choice pick after excelling for Lille and Strasbourg in Ligue 1.

He scored goals in each of his first four games for Bafana and is a clinical finisher in the box.

The current Golden Boy of South African football‚ Tau has developed into an excellent talent who is surely headed for one of Europe’s elite leagues‚ if he cannot get his paperwork sorted at English side Brighton & Hove Albion.

Has emerged as the chief goals threat within Bafana‚ with six goals in his last eight internationals. Is both a a scorer and creator of goals.

Provides something different to the Bafana attack in that he is more of a traditional ‘number nine’ that other players can play off.

Having said that‚ his weight of goals in the Dutch second-tier (24) in the past season saw him force his way back into the national reckoning.

Has only two caps in three years since making his debut.

Recently back from long-term injury‚ Vilakazi has been selected on reputation more than form‚ but brings an attacking threat from a number of positions‚ either in the midfield or as an out-and-out striker.

Featured in all three games at the 2015 Nations Cup‚ but injury meant he only played in two of Bafana’s qualifiers for this event.