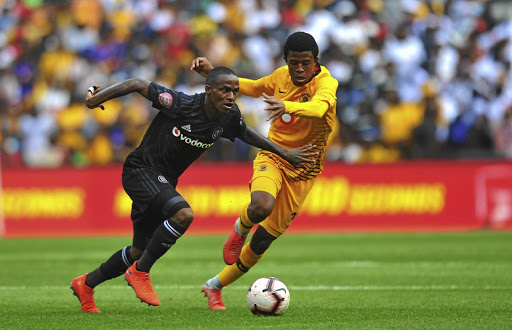 Just days after the State of the Nation Address, Kaizer Chiefs and Orlando Pirates delivered the state of the Soweto derby, which appears to still be tilted towards the Buccaneers judging by their 1-1 stalemate at FNB Stadium yesterday.

This was Chiefs' chance to finally snap their winless streak, but they failed as the Sea Robbers showed that they still have their number and came back from behind.

It was a missed opportunity for the Glamour Boys to end Bucs' dominance and their barren run, which is now at 12 games without victory.

And for the Buccaneers, it was a chance to close the gap between them and Bidvest Wits at the top of the table.

Chiefs coach Ernst Middendorp continued to show balls of steel in his selection as he gave new goalkeeper Daniel Akpeyi his debut on such a big occasion.

Virgil Vries was relegated to the grandstands at a safe distance, far away from the pitch where he could not make another "mea culpa".

The German also fielded Happy Mashiane, a player who only made his debut last month for the club, and had the bone crushing Willard Katsande on the bench.

Stars of the Soweto Derby

There were a few outstanding players in the Soweto Derby. Sunday World picks the star players from each side. Khama Billiat (Chiefs) This was ...
Sport
2 years ago

Poor Wayne Sandilands looked like a mistake waiting to happen in between the Bucs goal posts. He butterfingered three shots that he should easily have saved, and his jittery toes nearly earned him a trip to the hospital after a hard collision with Bernard Parker in the 13th minute.

Chiefs smelled blood and it was not long before they bombarded the opposing goal with long range missiles. With the spotlight of the match being squarely on Akpeyi and Sandilands, the score-line was goalless at half-time.

Chiefs' star striker Khama Billiat danced past a number of lunging tackles and made way into the penalty box only for Asavela Mbekile to foul him and concede a penalty.

Daniel Cardoso stepped up to blast the ball into the net in the 53rd minute.

After Amakhosi took the lead, Katsande entered the fray to try to consolidate their lead.

Chiefs nearly held on until the end, but with 10 minutes remaining their defences were unlocked after Ben Motshwari played through Thembinkosi Lorch who sidestepped Akpeyi to score in the 80th minute.

Although it's little consolation, in the end both Middendorp and Milutin Sredojevic maintained their unbeaten records in the derby.