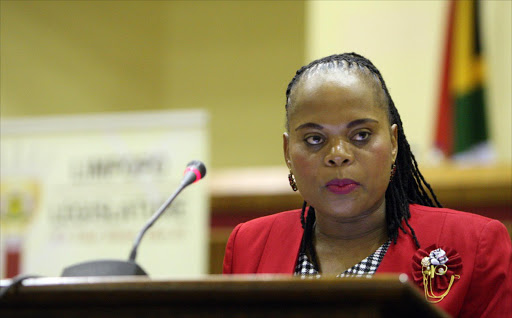 A Limpopo man could face a defamation lawsuit following claims he made on social media accusing Limpopo health MEC Dr Phophi Ramathuba of doing business with her own department.

Conty Lebepe took to Facebook on February 24 and accused Ramathuba of being a shareholder in Thilivhali Trading Enterprise, a company contracted by the department to provide security services at some of the health facilities around Limpopo.

A CIPC search by Sunday World showed that the company was solely owned by Thinavhuyo Mulangaphuma.

"This company is tendering with department of health in Limpopo and operates at the clinics and hospitals around Blouberg and Capricorn districts of our province.

The post reads: "Every month the department pays out this security company as per their terms and agreements. So what worries me is, since October 2018, the security officers of this Thilivhali company, those who work from Taaibosch clinic, Ratshatsha health centre, Bogrecht Clinic, Hellen Frans Hospital and Blouberg Hospital, have not been paid their salaries tot vandag.

"Worst thing is, it is alleged that health MEC Phophi Ramathuba is also [a] shareholder in this company. What the f**k is going on with this ANC leaders and their government. Let's get rid of tenders coz they only enrich ANC thugs and few greedy people of this country.

Limpopo's Jane Furse Hospital‚ which was forced to shut its doors after being damaged by heavy flooding in December‚ was reopened on Monday by health ...
News
3 years ago

"Although the money was too little with unbearable working conditions during apartheid, employees were paid in times (sic), you can't focus with an empty stomach, never."

Ramathuba has since unleashed her legal team to weigh options available to her, including taking legal action against Lebepe.

The MEC, through her lawyers Tladi & Associates, sent a letter of demand to Lebepe demanding that he writes a retraction by March 1, failure of which would result in him being sued.

The letter, seen by Sunday World, reads in part: "We have become aware of your publication on social media of allegations against the MEC in relation to Thilivhali security company and its relationship with its staff. You allege that the MEC is a member of this company and is therefore complicit in what you regard as abuse of its employees."

Acting department spokesperson Matome Mawasha said that Lebepe had missed the deadline to retract his statement, and as a result, Ramathuba will now proceed with the legal action to sue him for damages.

Mawasha also confirmed that the security company has signed a three-year contract with the department to provide security services in some of its health facilities but that Ramathuba was not linked to it.

Lebepe said he will not retract his statement until it is proven that the MEC is not a shareholder in the company. He said the company was allegedly abusing its employees under her watch because she was a shareholder.

HR manager at Thilivhali Trading Enterprise, Richard Mulaudzi, said Ramathuba was not part of the company and was not related to any of its owners.

Mulaudzi also denied allegations that security officers were not paid since October 2018.

He said some employees participated in an illegal strike in October 2018 and never came for their disciplinary hearing, and a decision was taken to terminate their contracts.

One of the former security officers, Stanley Lekala, said he got a letter notifying him of the termination of his contract in October and was asked to hand over his uniform.

Tladi & Associates have not responded to questions sent to them at the time of going to press.