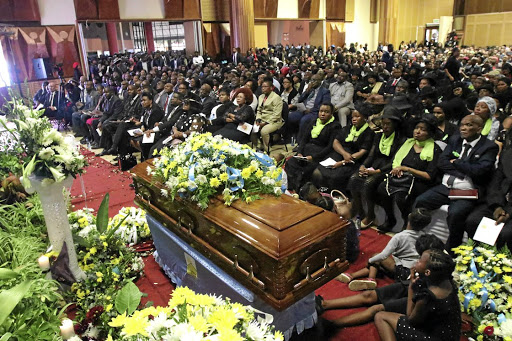 Mourners at the funeral service of Thorisho Themane who died from being assaulted by a group of teenagers in Polokwane. The public has demanded harsh punishment for his killers.
Image: ANTONIO MUCHAVE

Thorisho Themane was given a sendoff fit for a king, with police minister Bheki Cele and Limpopo premier Stanley Mathabatha in attendance.

Themane's death caused national outrage after his deadly assault. His last moments were captured on video that went viral this week.

The 28-year-old's funeral service was held at the Jack Botes Hall in Polokwane.

Cele told mourners he will talk to the National Prosecuting Authority and the department of justice to ensure that there is harsher punishment for those found responsible for Themane's death.

"We can't allow criminality in society. The government must make a good example of those arrested by making sure they reach old age in the comfort of high walls," he said.

He also commended people for not taking the law into their hands to avenge Themane's death. He urged parents to monitor their children's movements.

"As a parent, what comes to your mind when your child as young as 15 is not home at night?" asked the minister.

"I believe the people who were responsible for the death of Themane had taken something before they committed that crime," he said, alluding to the possibility of the suspects being under the influence of drugs or other substances.

Cele urged the police to prepare a good case against the perpetrators. In a moving tribute to their son, Themane's parents described his death as a tragic loss and said he put the interest of other people before his own.

Three adult suspects were arrested overnight in connection with the murder of Thoriso Themane, police confirmed on Friday.
News
2 years ago

"Thorisho never wanted to see other people hurt," said his father, Mahlapahlapana Themane, who is also a pastor.

"I am deeply saddened by the manner in which you died, but am consoled by the fact that you died calling the name of Jesus Christ," said his mother, Shishi Themane.

Mathabatha urged the youth to learn from Thorisho by respecting God. Themane died at the Pietersburg Hospital after being assaulted by a group of people in Flora Park, a suburb in Polokwane.

Nine people have since been arrested and six have appeared in the Polokwane magistrate's court on Friday.

The suspects were remanded in police custody until their next court appearance tomorrow, together with three more co-accused arrested on Thursday night.

The suspects arrested initially were pupils from various schools in Polokwane aged between 15 and 16, while three new suspects are all aged 36.

The spokesperson for police, Brigadier Motlafela Mojapelo, said more arrests would be made as investigations continued. Themane's coffin was carried to Silicon Cemetery in a horse-drawn cart.