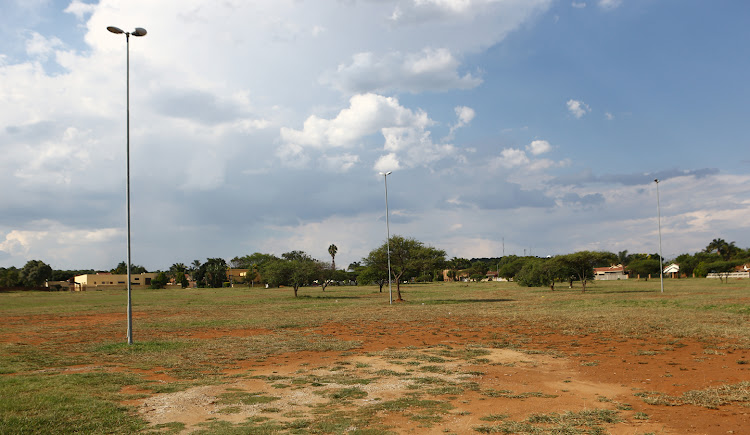 A park in the suburb of Flora Park, Polokwane, where Thoriso Themane was allegedly beaten up by a group of high school pupils. He died later in hospital.
Image: MASI LOSI

The trees swayed in Flora Park as a few dirty plastic bags and pieces of paper fluttered in the breeze. No people could be spotted on what was a quiet weekday afternoon.

But the stillness belied the horror seen in the park a few days earlier. It was here, just 1.4km from his Polokwane home, that Thoriso Themane was found bloodied and beaten at the weekend. He would die a short while later in hospital.

Two videos have surfaced showing the badly beaten Themane lying on the ground. In the background, his attackers can be heard telling him he will die.

Five people, all school boys, have been arrested for the murder. They are expected to appear in court on Thursday.

Police spokesperson Colonel Moatshe Ngoepe said more arrests were expected. At least 10 people are suspected of being involved in the attack.

A musician, Themane was apparently coming home from a church music practice when he was attacked.

The killing has left his family and friends – and the country – reeling, with videos of the incident being shared widely on social media.

On Wednesday, scores of people visited the Themane home to pay their respects. A prayer session was also hosted.

Inside the home, the mood was sombre. A double garage was filled with white chairs and people sitting against the wall.

Family and friends came in and out of the house, serving scones and juice to visitors, while pictures of Themane and two siblings were displayed on a brown room divider in the sitting room.

Tshegofatso Maponya, Themane’s 22-year-old cousin, said the family was still trying to come to terms with had happened to their “beloved brother”.

“It’s very hard,” she said. “It’s difficult, but we are gaining strength through different people who have been coming to share their condolences.”

Prior to learning of her cousin’s death, Maponya said the family thought he was sleeping over at a friend’s place and had probably forgotten to let them know.

She described Themane as “a bubbly person”.

“He got along with everyone and loved music so much,” she said.

Maponya said she had taken the decision to step away from social media because she could not bear to read about her cousin. She was also trying to avoid the rumours and speculation over what led to his death.

“We’ve been hearing so many things. Every day it’s a new thing. So I think I am fine not knowing what happened because none of that is going to bring him back anyway, so we might as well just bury him in peace,” she said.

Childhood friend and former roommate says he is still in disbelief because he was a peaceful person.
"He wouldn't harm anyone I still don't understand why he had to die... He was just peaceful who loved music and God..."#JusticeforThoriso
#justiceforthori @TimesLIVE pic.twitter.com/KUymjiRFtg

Amid this mood of mourning have come rumours of revenge attacks on the homes of those implicated in Themane’s death. But the local ANC Youth League spokesman, Tony Rachoene, strongly advised against anyone taking matters into their own hands.

“That has elements of criminalism. The matter is under police investigation, so I think we need to allow police to do their jobs and we have faith in our courts,” he said.

However, he said a march had been planned to put pressure on the police to treat the case with urgency.