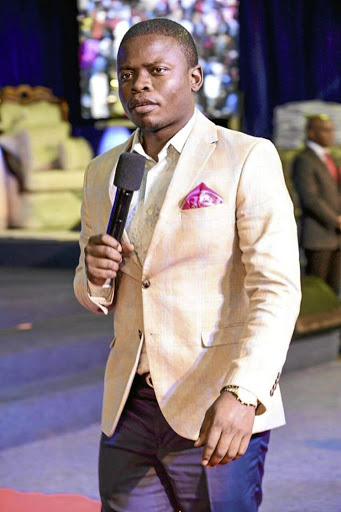 Controversial leader of Enlightened Christian Gathering (ECG) Shepherd Bushiri and one of his employees are facing a mountain of legal woes following a prophecy in which a North West businesswoman was called a witch live on TV.

Now the businesswoman who provides mining services has slapped Bushiri and his employee with letters of demand of R1-million and R500000 respectively. Lebohang Mpane, who said in her legal papers that she was defamed, has also opened a case of crimen injuria with the police.

In the prophetic sermon, Bushiri called Mpane a sangoma who had put a spell on Sibongile Mable Miya - one of his employees and manager at one of his companies - and her ex-husband Andile Kula.

According to the sermon posted on YouTube, Bushiri had prophesied about Miya in front of his congregation and told her that she was in serious pain after losing her husband to Mpane. In the same sermon, Bushiri could be heard saying that Mpane had bewitched the two to break them up.

Sandton police spokesman Molefe Mogodi confirmed the case was registered and said it was transferred to Pretoria West.

In an affidavit deposed at the station, Mpane said she was deeply distressed and disturbed when she heard Bushiri's statements in a clip forwarded to her by her sister.

"In his sermon Pastor Bushiri purported to prophesy about me, my relationship with my husband, Andile Kula, as well as circumstances under which we got married. All this theatrics in the name of 'prophecy' was done with the concurrence and active approval of the ex-wife of my husband.

"The nature and content of the 'prophecy' was inter-alia:

The businesswoman also said her business also took a knock as a result of Bushiri's prophecy. She also revealed that her husband was forced to resign from his work due to suspicion which was created around him as a result of the said prophecy.

She said she also suffered a great deal of stress and trauma as a result and she was now taking medication to deal with her condition.

According to the letter which we have seen, Mpane has demanded that the man of the cloth and his employee should retract and apologise to her for their statements or face a lawsuit.

Bushiri was expected to face a R1-million lawsuit and Miya a R500000 demand.

Eric Mabuza of Mabuza Attorneys confirmed that they were representing Mpane in the defamation case.

The lawyer also confirmed that their client had specifically asked to be represented by celebrated advocate Thembeka Ngcukaitobi.

Miya confirmed that she was Bushiri's employee.

When asked about the letters of demand, she said: "They just told me that it was a lawsuit but I'm not worried about it. My question is, why is this woman coming out now after two years? Is Lebohang getting too broke now? The sermon was done in 2016," she said.

Prophet Shepherd Bushiri and one of his employees are facing a lawsuit.
Image: Twitter
Next Article