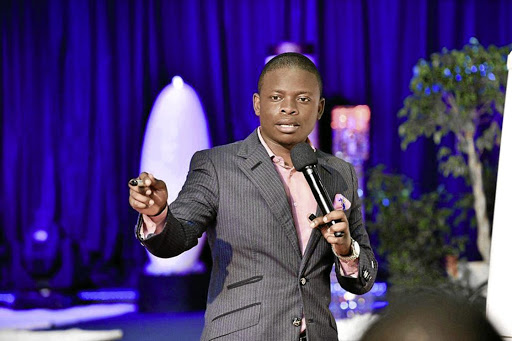 Renowned man of the cloth Prophet Shepherd Bushiri claims to be a victim of a smear campaign involving a Pretoria woman and the elite police unit, the Hawks.

Sunday World can reveal that a Pretoria woman opened a case of rape against Bushiri at a Tshwane police station and later asked for its withdrawal. The woman later said she was coerced into concocting the case against Bushiri by his enemies.

The woman changed her statement after she allegedly mentioned other "victims", believed to be a reference to congregants of Bushiri's Pretoria church - the
Enlightened Christian Gathering.

Apparently the Hawks, who have taken over the case, are continuing with their investigations.

The Hawks have since referred the matter to the National Prosecution Authority ( NPA) for a decision.

NPA South Gauteng spokeswoman Phindi Louw-Mjonondwane confirmed that the woman opened the case against Bushiri and that the matter is being investigated by the Hawks.

"The communique between us and the Hawks confirmed that the docket is with them and is still under investigation," she said.

Hawks spokesman Hangwani Mulaudzi declined to discuss the case with Sunday World and said it would jeopardise their investigations.

Bushiri will cooperate with Hawks

"The DPCI (Hawks) has already confirmed that there are investigations proceeding. We are however not in a position to divulge any information as it would jeopardise the gains we have already realised as well as threaten the cooperation we have with the witnesses. We do not investigate through the media and reserve our right not to comment further."

"(Name withheld) and other girls have revealed what made them lie to make those statements.

" For this reason we will leave such in the hands of the authorities to investigate and come up with real information and take it from there," he said.

Baloyi said Bushiri has reported the "smear campaign" against him to the Inspector-General of Intelligence to investigate. "The law is simple, he who alleges must prove or face the same law.

Testifiers claim they were paid to lie about healing.
News
3 years ago

"(Hawks investigator's name withheld) is commonly mentioned by so many people who have come to register confessions of how she would scare and threaten them to make laundering statements against the prophet," he said.

Sunday World is in possession of a recorded conversation between the Hawks investigator and sources inside the church who claim to have knowledge on the matter.

In the recording, the detective is heard telling the "informant" that the woman who claimed there are more victims later changed her version.

A Hawks official who didn't want to be named because he is not allowed to speak to the media confirmed they were investigating a case of rape against Bushiri and were ready to arrest him.

The official said they have since referred the matter to the NPA for a decision.

However, Baloyi said Bushiri was not aware of any investigation against him.

Prophet Shepherd Bushiri has clarified that he is not responsible for the hefty fee being charged to attend a conference.
News
3 years ago
Next Article