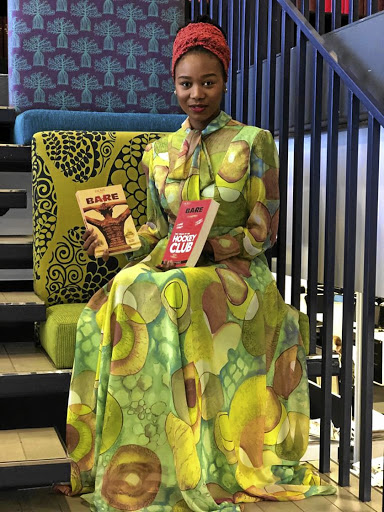 Controversial author Jackie Phamotse has been nominated for a coveted award at the SA Book Awards.
Image: Nokuthula Zwane

One of SA's most controversial authors Jackie Phamotse has emerged from a scathing legal skirmish against TV mogul Basetsana Kumalo and her husband Romeo with a nomination for a coveted award.

This as Phamotse's book Bare: The Blesser Game was nominated among the top 10 best-selling books for the 2019 SA Book Awards.

The book, which was published in 2017 and tells a Jimmy comes to Joburg kind of story, has been nominated under the category best adult fiction along with The Zulu Wedding by author Dudu Busani-Dube.

Phamotse and Busani-Dube are the only two female authors to be nominated for the award.

The 31-year-old Soweto-born author says she is excited about the nomination, noting that it has not been an easy journey getting on the list, especially because she is self-published.

"I believe my book was nominated based on the message it sent out. It is a huge milestone for me to be nominated amongst the best."

The book details the hardships of a young woman from a mining town who came to Joburg in the hope of a better life.

The storyline tells the nitty-gritties of the blesser/blessee relationships and how the real world eats up and spits out people who want to live life in the fast lane.

It also tells of what is happening in the glitzy streets of Sandton and how rich men prey on young women, commonly known as slay queens, by sleeping with them in exchange for their lavish lifestyles.

The main character in the story, Treasure Mohapi, tells a tale about her life after arriving in the City of Gold in search of a better life and things not working out.

Treasure relates how she was sexually abused, and how she suffered and survived depression and suicidal thoughts.

In the book, Phamotse also tells a story about her life experiences after she was gang-raped and how she survived the odds.

Bare is dedicated to the victims of sexual abuse, with Phamotse saying the nomination comes amidst the ongoing legal feud she is embroiled in with the Kumalos over a controversial tweet she posted last year.

The Kumalos dragged her to court after she tweeted claims that there was a sex tape involving the husband of a well-known media mogul with a younger rapper.

Even though Phamotse didn't mention the names in her tweet, social media users assumed the tweets were about the Kumalos. The court had since ordered Phamotse to take down the tweets and apologise to the Kumalos. A separate case of crimen injuria against Phamotse is still ongoing at the Midrand magistrates' court.

Phamotse says the legal battle will not distract her, explaining that she is motivated to stand by her own "truth" when she puts pen to paper.

"There are so many people who don't stand up for themselves because they are afraid of people who are powerful. I am not shaken by the challenges that came with the books I have written, they have motivated me."

She also authored two more books, I Tweet What I Like - So Sue Me and Bare: The Cradle of the Hockey Club.

Author Jackie Phamotse has been charged with crimen injuria for comments she made last year about power couple Romeo and Basetsana Kumalo.
Entertainment
3 years ago

She says this is just the beginning of great things to come as she is working on a plan to turn the Bare story into a movie.

Phamotse says auditions for the film will start next month with the shooting aimed to commence in December.

"I am looking for a new face, someone who is upcoming and strong like me to play Treasure Mohapi," she says.

She adds that she also hopes to work with legends like Florence Masebe, who will play Treasure's mother in the movie if the project succeeds.

- The SA Book Awards winners will be announced on August 27 in Cape Town.