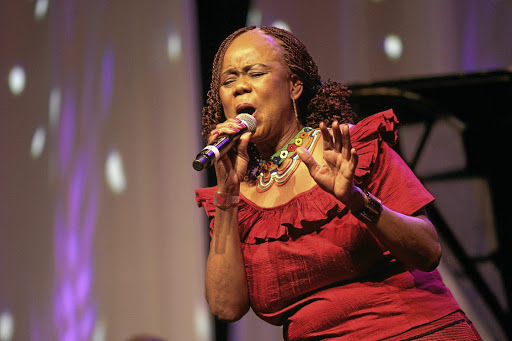 Thembi Mtshali-Jones performs at the Cape Town International Jazz Festival in 2015. The versatile star is thrilled by her US gong.
Image: Veli Nhlapo

Veteran actress and musician Thembi Mtshali-Jones' artistic talents have been recognised in the US.

The artist, best known for her role as Sis' Thoko in the old sitcom Sgudi 'Snaysi, will be honoured with a Living Legends Award at the National Black Theatre Festival 2019, to be hosted in North Carolina later this month.

The award will celebrate the theatre veteran for her passion for and contribution to the black theatre industry.

Mtshali-Jones, 69, who is now acting on e.tv production Imbewu as MaNdlovu, said she was excited to be honoured at the international ceremony that searches every country for the best talent annually.

"I am excited that I will be sharing the stage with other veterans to celebrate our talent. This shows that there are people who are mindful of drama arts and are willing to put our names on the map. I'm much happy," she said.

She said she received the news in February that she was going to be honoured alongside American actors Marjorie Moon and Roscoe Orman.

Shwa met her childhood heroines Leleti Khumalo, aka Sarafina, and Thembi Mtshali-Jones, loved for her role as Thoko in Sgudi 'Snaysi.
Shwashwi
3 years ago

"Theatre work is the one that fills my heart, that is where I started before we had television in this country," she said.

The actress said she was now working on a memoir for her 70th year celebration as she believes she has "a story to tell".

"I'm grateful to all who have supported me to this very day.

"I couldn't have come this far on my own. In every production I share the spaces with my other colleagues and we feed off each other," she said.

She made her debut in theatre in the production Umbatha at The William Shakespeare Festival in 1971, after which she was discovered by playwright Welcome Msomi - and she's not ready to stop.