Middendorp after Chiefs' defeat to United: 'Unfortunately‚ we seem to have it against this team' 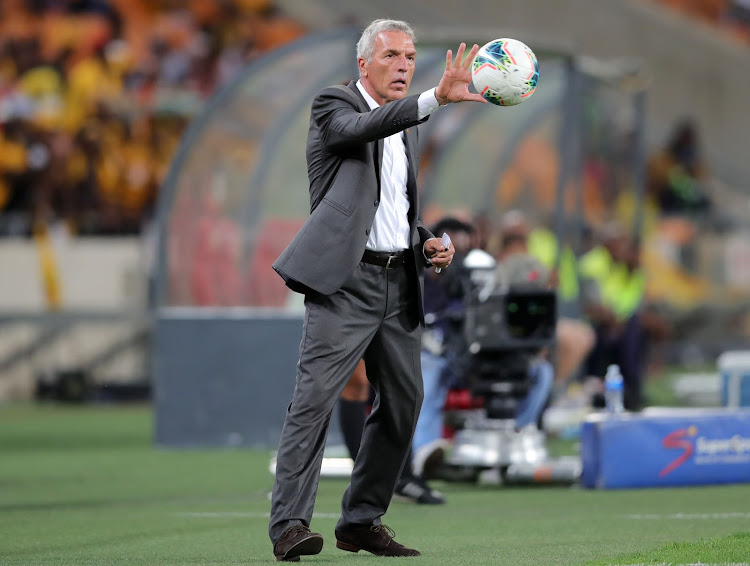 Mistakes in key moments cost Kaizer Chiefs in their 2-1 Absa Premiership home defeat against 2019-20 bogey side Maritzburg United at FNB Stadium on Saturday evening‚ coach Ernst Middendorp said afterwards‚ but perhaps there was more to it than just that.

Middendorp correctly pointed out that Chiefs were not poor against the team who had managed a costly league draw against Amakhosi in Pietermaritzburg in December‚ and eliminated them in the Telkom Knockout semifinals in November.

What the coach did not add was that Chiefs also‚ on this particular night‚ did not have the confidence‚ nor did they produce the necessary intensity‚ required from championship material.

There has always been the potential in Chiefs’ remarkable run with a clear gap at the top of the PSL that if a team behind them – most intimidating‚ defending champions Mamelodi Sundowns – hit form to put the pressure on an inexperienced squad.

Some confirmation of that appeared to come on Saturday‚ as Chiefs‚ perhaps‚ appeared rattled by Downs’ earlier 3-0 win against Chippa United at Loftus.

Chiefs produced chances‚ but in a seemingly over-cautious manner‚ and then were nervy spawning them.

Amakhosi pulled one back 10 minutes later‚ Samir Nurkovic heading in Manyama’s corner. The intensity Chiefs displayed having gone two goals down was what they had needed earlier in the game.

“You know‚ half time already 13 goal attempts to zero‚ two excellent shots [early in the second half]‚ and nothing that comes from it. And all of a sudden you are 2-0 down after you had opportunities to be far ahead.

“If I take just the huge opportunity [for Manyama]‚ and probably it was too casual‚ one against one with the goalkeeper from three or four metres out.

“ ... The rest of the defence was good‚ we had not allowed the counter moments as we had the in the [Telkom] semifinal‚ or [the league game] in December.

“We had it quite organised in terms of our attacking movement going forward – I think it was around 22 shots to two.

“The transitions from attack to defence or defence to attack could have been a bit more paced.

“But it was not a game where we said poor performance. Definitely not.

The game leaves question marks for Chiefs. They have a definite over-reliance on set-piece for goals‚ which makes them one-dimensional.

Akpeyi‚ despite his form‚ has this ability to make a game-costing mistake.

He was not tested much‚ but a trademark distribution ball led to Amakhosi’s goal.

Khune‚ nursed to match fitness‚ is solid – he at times carried Amakhosi as a near one-man show before his injury setbacks of these two seasons.

Chiefs are – from four seasons without a trophy – inexperienced at closing out opportunities at silverware. That factor‚ increased by the pressure to reverse their barren spell‚ have shown in cup finals and semifinals.

Will it be their downfall trying to clinch what always has seemed an unlikely league title in their 50th anniversary season?.

Stellenbosch FC coach Steve Barker praised a growing maturity in his squad as the PSL new boys dispatched SuperSport United on Friday to move into ...
Sport
2 years ago