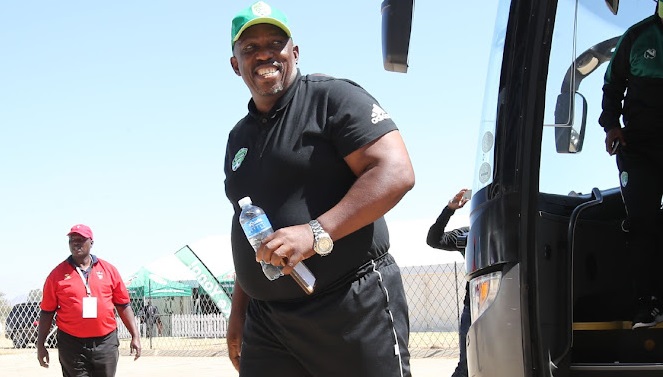 Khabo Zondo the new Royal AM coach, was last attached to a coach in 2016.
Image: Samuel Shivambu/BackpagePix

Having been away from top-flight football for six years, new Royal AM coach Khabo Zondo is proud that the club headhunted him.

Royal sprung a surprise when they confirmed the almost forgotten Zondo as their new coach last Friday, having been linked to coaches like Gavin Hunt, Dan Malesela and Cavin Johnson among others. Zondo was last attached to a club in 2016 when he was training Royal Eagles, an outfit that was co-owned by his current employer Shauwn Mkhize and her then husband S'bu Mpisane.

"I had been focusing on my businesses when Royal approached me. I am in tombstones business. I am extremely excited that I have been given this challenge again to coach a top-flight side. I am very proud that I was chosen without applying for the job, that shows the club believe in my work,'' Zondo told Sowetan.

During his days at Golden Arrows between 2005 and 2007, Zondo was admired for his enterprising brand of football. He vows his philosophy hasn't changed, singling out Kabelo Mahlasela as a player who'll be instrumental in how Royal will play under him. From 2013 until 2020, when the programme was discontinued, Zondo was one of the Nedbank Ke Yona coaches.

"Nothing has changed with regard to my feelings about the game. I would love to see a team that attacks without fear. We want to be a team that will score a lot of goals. Looking at what we have, a player like Mahlasela will be crucial in that style of play because I am looking at players who can take on defenders and all that,'' Zondo explained.

"We have a balanced team but we'll continue to monitor the market to see if we can add a few new faces, especially because we'll be playing the [CAF] Confederation Cup as well,'' noted the 60-year-old Zondo, who has 52 Premiership matches under his belt as a mentor.

Panyaza Lesufi steps down as president of Swallows FC

Panyaza Lesufi has stepped down as president of Swallows FC after his election as Gauteng provincial chair for the ANC.
Sport
1 month ago

Despite confirming John Maduka as their new coach a few weeks ago, Maritzburg United have been one of the more passive clubs in the transfer market.
Sport
1 month ago
Next Article