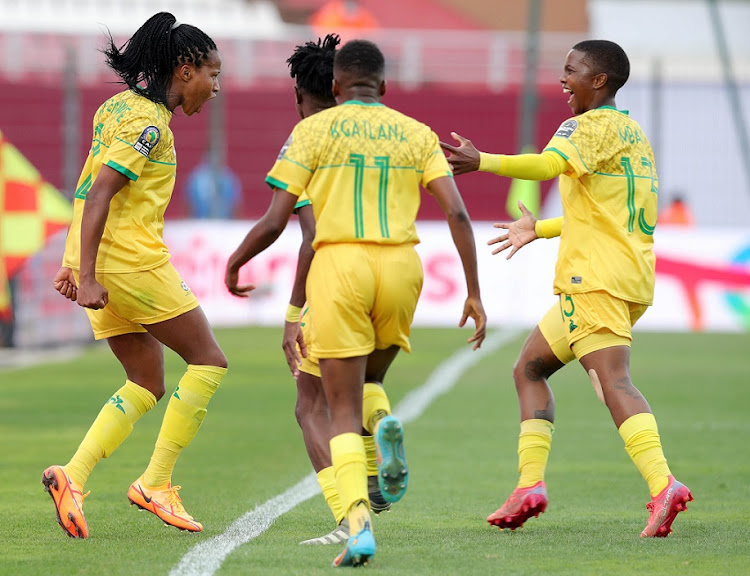 Banyana Banyana got off to a dream start as, with a calm air of professionalism, they swept aside tournament favourites Nigeria 2-1 in their opening Women’s Africa Cup of Nations (Wafcon) group C match in Rabat, Morocco, on Monday.

SA are the perennial bridesmaids of the Wafcon, having been five-time runners-up, three of those to the Super Falcons, including on penalties in the 2018 final. Banyana were full value for a famous victory at Stade Prince Moulay Al Hassan for the manner in which they took the game to the 11-time brides of the Wafcon.

Lightning strikes within two minutes from Jermaine Seoposenwe in the 61st minute and Hildah Magaia in the 63rd earned SA victory. Rasheedat Ajibade pulled back a consolation for Nigeria in the second minute of added time.

Banyana now need to keep their heads against the other two teams in group C, the tournament rookie pair of Burundi on Thursday and Botswana on Sunday, to clinch their quarterfinal spot.

The opening half-hour was tight and tactical.

The lighter, more mobile Banyana aimed to keep the ball moving in possession, without breaching the Falcons. Nigeria aimed to use their muscle and speed to their advantage, also unable to breach SA. Both managed some half-chances towards the break.

Nigeria forced the first real save five minutes back from the change rooms as a rare defensive error on the edge of the box allowed big striker Asisat Oshoala to strike at goal, SA goalkeeper Andile Dlamini making an athletic stop.

It’s a victory for Banyana Banyana!

Banyana pushed forward, though tended to over-elaborate in some promising positions. When their two goals came, though, the build-ups and finishes were played to perfection.

A long ball found winger Thembi Kgatlana, whose pace roaming from left to right wing troubled the Super Falcons all evening, on the right to cut in and feed the run past a defender into the area of Seoposenwe to beat keeper Tochukwu Oluehi.

The game had barely restarted when Seoposenwe’s delightful back-heel in attack in the middle found Linda Motlhalo to produce the through-pass for Magaia to beat offside and finish expertly past Oluehi.

A Nigerian corner in injury time was not cleared, allowing big centreback Onome Ebi to play the ball back in for Ajibade to beat Dlamini.