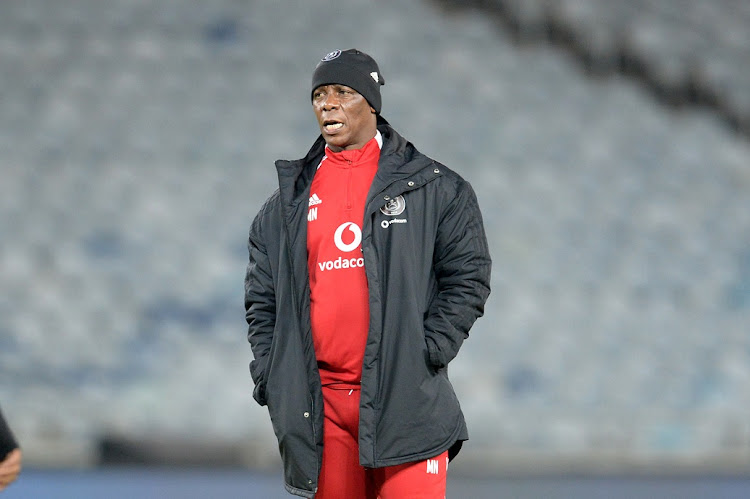 Orlando Pirates co-coach Mandla Ncikazi has apologised to the Confederation of African Football (Caf) for using the wrong platform to vent about alleged mistreatment the club received in Tanzania.

Caf sent a letter of warning to the Bucs coach after the federation received a complaint from Simba SC of Tanzania of “unsporting” behaviour by Ncikazi.

After guiding Pirates to a 4-1 DStv Premiership victory over Maritzburg United at Orlando Stadium on Tuesday night, the coach confirmed he was warned by Caf and responded to the continental governing body.

“I think Caf understood what was in the letter of my response [to Caf] — that, one, I apologise to Caf. Maybe the utterances were made on the wrong platform, we could have channelled the utterances differently,” Ncikazi said.

“The platform I used wasn’t the correct one — that was my apology.

“But for the other incidents that really take place in Africa, there is no apology for that.

“But for what I said and the platform and the way I said that, for that I apologise.”

Orlando Pirates co-coach Fadlu Davids is hoping the neutral venue of Uyo in Nigeria can work to his team’s advantage in Friday night’s Caf ...
Sport
3 months ago

Ncikazi said after Bucs' semifinal first leg in Tanzania last month: “As Africans, let’s change this mentality that when opponents come to Tanzania you are so hostile to them that you treat them like animals, so inhumane, everywhere you go, we are treated so badly.”

Since joining Pirates, Ncikazi has at times been outspoken and his comments have stirred controversy.

The coach was criticised at the beginning of 2022 when he said the Premier Soccer League was possibly “bigger” than the African Cup of Nations (Afcon). He was attempting to explain why Gabadinho Mhango starred for Malawi at the 2023 Nations Cup in Cameroon, but was battling to get a starting place for Pirates.

Orlando Pirates have a foot in the Caf Confederation Cup final after a polished 2-0 victory in the opening, away leg of their semifinal against Al ...
Sport
3 months ago

The SA Football Association (Safa) have written a letter of complaint to the Confederation of African Football (Caf) over the burning of a substance ...
Sport
3 months ago

Orlando Pirates’ injury woes have subsided and the team will improve in their remaining five DStv Premiership matches of the season and a two-legged ...
Sport
3 months ago
Next Article