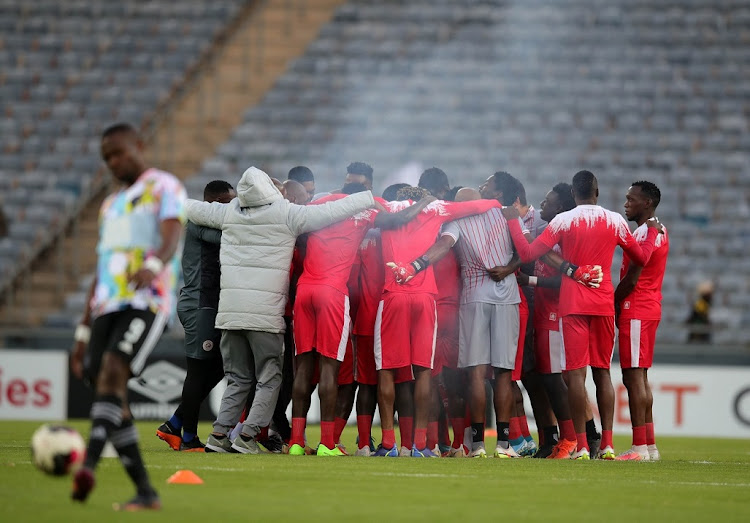 Simba SC players gather in the centre circle before warming for the Caf Confederation Cup quarterfinal against Orlando Pirates at Orlando Stadium in Johannesburg on April 24 2022.
Image: Samuel Shivambu/BackpagePix

The SA Football Association (Safa) has written a letter of complaint to the Confederation of African Football (Caf) over the burning of a substance in the middle of the Orlando Stadium pitch by Tanzanian club Simba SC on Sunday.

Simba’s action took place before the second leg of their Caf Confederation Cup quarterfinal against Orlando Pirates on Sunday, where the SA team won 1-0 to make the aggregate scoreline 1-1. Bucs won 4-3 on penalties.

During the warm-ups the Simba players huddled in the centre circle. Smoke was seen emerging from the huddle and cameras picked up flames at the players’ feet, on the halfway line, as a substance was burnt in an apparent muti practise.

“We have written a formal complaint to Caf and we will be following up,” Motlanthe said on Thursday.

No muti against the Mighty Buccaneers shall prosper. pic.twitter.com/vAbfgkbT41

“The complaint was that the action we viewed as against the culture. SA has diverse cultural beliefs and what they did, doing that in public, went against some of the cultures, which is unacceptable in this country.

“As far as we respect the cultures of people, that can’t be done. Even in our local league we don’t allow those things.

“And it has the potential of damaging the field and we believe it was not in any way sports-related.”

Motlanthe said Safa’s concern was Simba’s action was disrespectful given that SA teams would not go to another country and openly practise muti rituals in the middle of a field before a game.

“Exactly, you can’t — they [the host club] will call security,” he said.

“Even for you to get into the stadium the day before is a problem because you are followed by the police all around. It was disrespectful and poor sportsmanship.”

Simba players appear to have burnt the centre circle during the huddle.

Motlanthe said Safa wrote the complaint on their own steam, not at the request of Pirates.

“It was us. Remember when our clubs play in continental tournaments Safa will always be involved with the matches — we send a number of people there.

“The HOD [in continental competition] of Pirates is Gerald Don, who is a Safa NEC member.”

The two legs of the quarterfinal were a bad-tempered affair. After Simba’s first leg in Dar es Salaam Pirates coach Mandla Ncikazi slammed the hosts’ alleged gamesmanship and said Bucs were “treated like animals” in Tanzania.

Simba CEO Barbara Gonzalez hit back with a statement that said Ncikazi's remarks were “defamatory”, “unprofessional an unethical” and “distasteful”, and against the spirit of the historical relationship between SA and Tanzania.