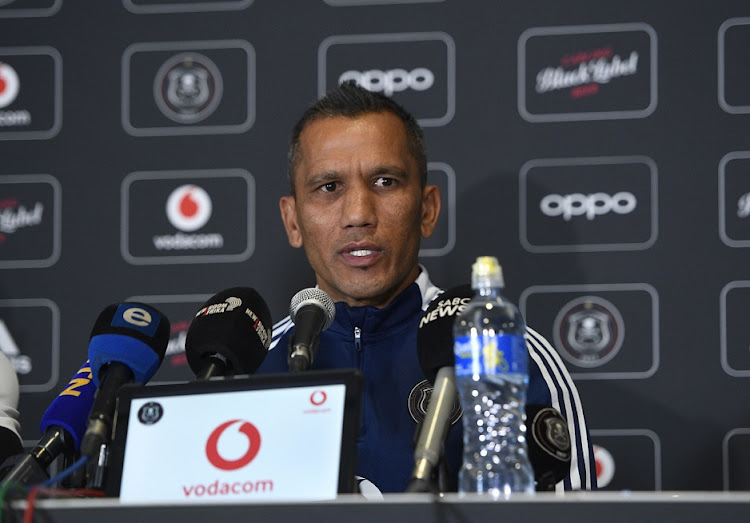 Orlando Pirates co-coach Fadlu Davids is hoping the neutral venue of Uyo in Nigeria can work to his team’s advantage in Friday night’s Caf Confederation Cup final against RS Berkane of Morocco in more ways than one.

Davids appealed to Nigerians to back Pirates, not least because one of Uyo’s own — Bucs’ influential centreback Olisa Ndah — used to call Godswill Akpabio International Stadium his home when he turned out there for Akwa United, who use it as their home ground.

He said the neutral venue should also tone down Berkane’s tactic of aggressively heightening emotions at flashpoints in a game to earn decisions from referees.

“We’re quite happy because it’s a neutral venue — of course if the final was in Morocco it would be a different story,” Davids said as Pirates trained at Orlando Stadium on Tuesday before their departure for Uyo on Wednesday morning.

“I urge the Nigerian fans to come and support us. Their prodigal son, Ndah, returns to their stadium. We’re playing at Akwa United’s stadium where he won the league [in 2020-21] before he joined Pirates.”

Davids and co-coach Mandla Ncikazi’s analysis of opponents — including in their 2-1 aggregate semifinal win against Libya’s Al Ahli Tripoli where Bucs progressed despite losing 1-0 at Orlando on Sunday night — has been one of Bucs’ strengths reaching the Confed final.

Davids said Pirates monitored Berkane from the group stage as they competed there against Bucs’ quarterfinal opponents, Tanzania’s Simba SC.

He drew attention to the two red cards handed out home and away to Berkane’s Egyptian opponents Al Masry in the group stage.

“Very strangely when you look into the analysis of Al Masry in both legs, and not only Al Masry, there are always red cards against the opposition. When you go into it a bit deeper they [Berkane] are quite an emotional team,” Davids said.

“So we’ve really got to be calm in relation to our thinking, not get dragged into these scuffles and emotional moments they try to create.

“But you’ve got to give it to Caf for allowing VAR [video assistant referee] in the [Confed] knockout stages. It’s been a huge improvement not only on decisions but in the overall standard of the game — goals, offsides and other decisions.

“So we expect VAR to be the clear neutral factor, and we’re already preparing our players to be calm, control their thinking, don’t get sucked into these silly games that Berkane try to play, trying to influence the referees in certain moments.”

Pirates benefited from a VAR decision, overturning a penalty awarded for handball, in the semifinal second leg against Ahli.