Pioli repays Milan's faith after rousing the Serie A giants 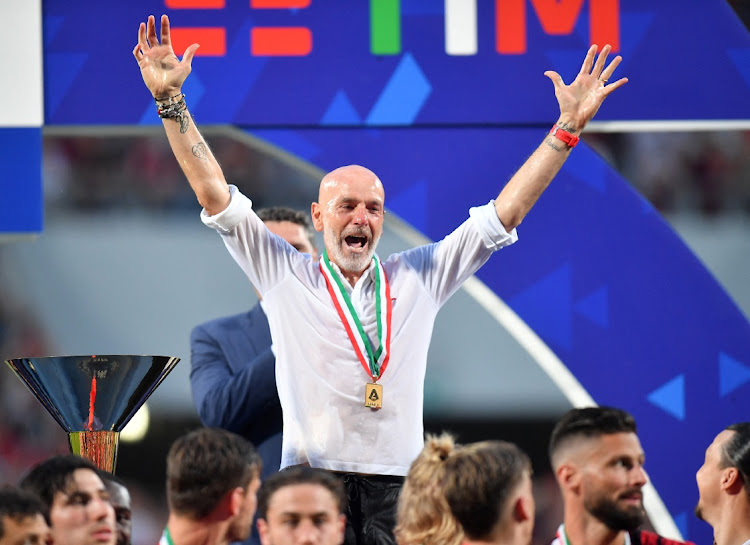 Milan - AC Milan supporters will look back on their club's gamble to stick with unproven coach Stefano Pioli as the decision that set them on course to winning their first Serie A title in 11 years.

A double from Olivier Giroud inspired Milan to a 3-0 victory at Sassuolo in their season finale on Sunday to seal the Serie A title ahead of rivals Inter Milan, ending what had been too long a wait for the Scudetto for a club of Milan's grandeur.

The man who masterminded the title triumph collected the first trophy of his 19-year coaching career, but it could have been so very different had the club not shown faith in him at the start of Milan's journey back to the top.

Milan's fall from grace following their previous Scudetto triumph in 2011 was spectacular. Four years after their 18th Serie A triumph, the seven-time European Cup winners finished 10th in the standings and they spent seven seasons outside the top four of the Italian top flight between 2014 and 2020.

After Massimiliano Allegri's departure in 2014, six permanent coaches in five years tried and failed to turn things around, before Pioli came in to steady the ship.

The initial results were mixed after Pioli succeeded Marco Giampaolo in October 2019, before a fine end to the 2019-20 season secured Milan a return to European competition for the following campaign.

Pioli, however, appeared set to be replaced ahead of the 2020-21 season, with former RB Leipzig and Schalke 04 coach Ralf Rangnick reportedly coming in.

Sporting director Paulo Maldini instead decided to give Pioli a new deal, revealing that he felt Rangnick was not the "right fit" for the club.

Pioli restored Milan to the big time without breaking the bank, and by keeping things simple.

Astute signings last season, such as midfielder Sandro Tonali, Croatian forward Ante Rebic and Denmark captain Simon Kjaer, helped Milan to finish second in the standings, with the return of veteran striker Zlatan Ibrahimovic firing them back up the table.

A mix of exciting young prospects such as defender Fikayo Tomori, alongside more experienced signings like Giroud, took Milan to the next level this season.

"We believed in the young players we brought in and in working to a budget," Maldini, who was the club's most decorated player, told DAZN.

"We did not buy ready-made champions but guys like Theo (Hernandez) who were promising but who had been lost. Or ones like (Rafael) Leao who was on the bench in Lille."

Manchester City won the Premier League title by a point from Liverpool on a thrilling final day on Sunday, prompting comparisons with their dramatic ...
Sport
2 months ago

Liverpool came from a goal down to beat Wolverhampton Wanderers 3-1 yesterday, but it was not enough to earn them their second Premier League title, ...
Sport
2 months ago

Manchester United interim boss Ralf Rangnick accepted partial blame for their underwhelming season but said he was unable to effectively implement ...
Sport
2 months ago
Next Article