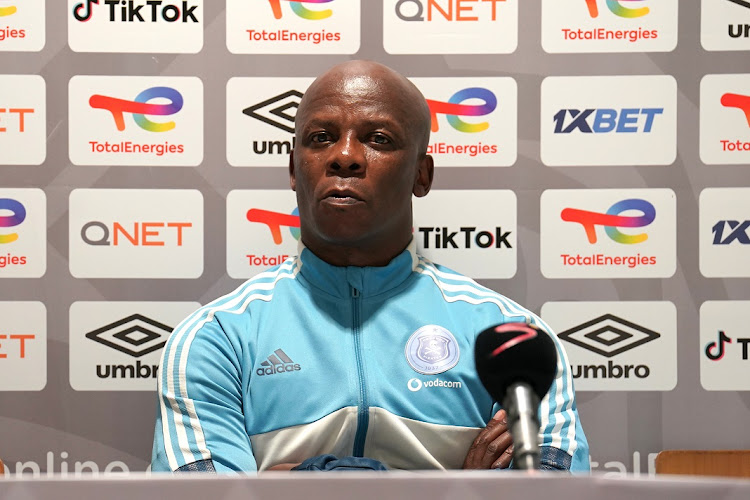 Orlando Pirates' co-coaches have a responsibility to lift the players as the Buccaneers aim to put their Caf Confederation Cup final disappointment behind them and finish as high as they can in the DStv Premiership, Bucs boss Mandla Ncikazi said.

As the league wrapped up this past weekend — apart from two rained-out games — seventh-placed Pirates still have three matches to play due to scheduling clashes with their Confederation Cup semifinal and final.

Bucs have little time to cry over spilt milk after their penalties loss against RS Berkane in Friday night's Confed final as they host Maritzburg United at Orlando Stadium on Tuesday night (7.30pm).

Pirates play Royal AM at Chatsworth Stadium on Friday night. They conclude their 2021-22 season against SuperSport United at Lucas Moripe Stadium (7.30pm) on Monday.

Bucs have an outside chance of even ending as high as second place, which would go a long way to making up for a disappointing domestic campaign under coaches Nckikazi and Fadlu Davids. It is highly unlikely though — Pirates need to win all three games and for Royal to lose their last two.

'It is what it is,’ says Pirates coach Mandla Ncikazi as he surveys wreckage of Confed Cup final loss

Disappointed Orlando Pirates coach Mandla Ncikazi blamed the team’s poor finishing for their 5-4 loss to Moroccan side RS Berkane in a penalty ...
Sport
1 month ago

“As coaches we have a responsibility to lift the players. You are playing a league match on Tuesday and these are the same players that must play,” Ncikazi said.

“It has not been a good season for our team. The reasons are the ones you saw [against Berkane], where a match is dominated like we dominated but the outcome at the end is not equal to the way you played.

“The players are experienced. The coaches have a responsibility to do their job in motivating the players to be ready for the next challenges. The players will come back. Pirates can play better than what they did [on Friday]. It's a big brand — we just have to prove that on the field of play.”

One of the two games delayed by rain on the weekend — AmaZulu against Lamontville Golden Arrows at Moses Mabhida Stadium — will also be played on Tuesday (3pm).

Royal AM met Sundowns in the other rescheduled match at Chatsworth Stadium on Monday afternoon.