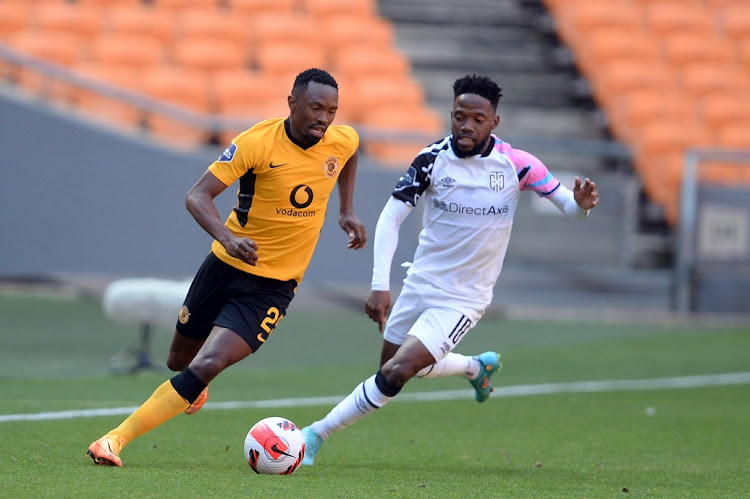 Bernard Parker of Kaizer Chiefs and Mduduzi Mdantsane of Cape Town City during the DStv Premiership match at FNB Stadium on April 30 2022. The match was ordered to be played in an arbitration decision after Chiefs failed to honour the orginal fixture in December.
Image: Lefty Shivambu/Gallo Images

Kaizer Chiefs and the National Soccer League (NSL) have reached a settlement regarding the two matches the club failed to honour in December.

The matter will not proceed in the South Gauteng High Court on Tuesday and is resolved. Chiefs will almost certainly be called before the Premier Soccer League (PSL, the trading name of the NSL) disciplinary committee by the league’s prosecutor Zola Majavu.

The case remains on the roll at the high court, TimesLIVE is informed, but the judge will declare a settlement has been reached between the parties on Tuesday and strike it off.

The NSL took the case to the high court asking for a review of the arbitration decision by Nazeer Cassim SC that the two DStv Premiership games against Cape Town City at FNB Stadium and Lamontville Golden Arrows in Durban be rescheduled and played.

Chiefs, amid an outbreak of 31 cases of Covid-19 at the club, applied to the PSL for their games in December to be postponed. The application was rejected by the football department and also the league’s executive committee.

The settlement reached is apparently to avoid a prolonged court case on a matter that is now moot, given Amakhosi lost both rescheduled matches.

Making enquiries to attend the digital high court hearing, TimesLIVE received a response that Chiefs had withdrawn its opposition to the NSL’s application.

“This office received written notification from the parties on May 6 at 4.32pm advising that Kaizer Chiefs FC had withdrawn its opposition to the National Soccer League’s urgent review application,” Antoinette du Toit, the judge's secretary, replied via email.

“In light of the above the virtual court hearing for tomorrow [Tuesday] has been cancelled.”

Chiefs now face a PSL DC where, according to NSL rules, 3-0 victories will be awarded to City and Arrows.

Given Chiefs lost both rescheduled games 2-1 against Arrows on April 27 and City on April 30, this can only affect the club’s goal difference on the 2021-2022 Premiership log. Amakhosi may also face a fine.

Chiefs face a separate DC on charges of fielding two players who were not properly registered — reserve players Aiden Tristan McCarthy and Mduduzi Shabalala — against Sekhukhune United on December 12, a match that took place amid the club’s Covid-19 crisis.