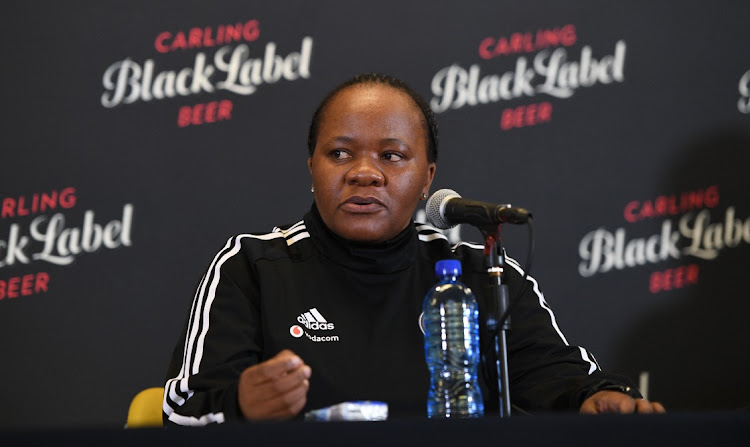 TS Galaxy media officer Minenhle Mkhize wants Thandi Merafe to be punished after opening a case of assault against her at Orlando police station yesterday.

Mkhize was allegedly slapped by the Orlando Pirates media officer before Galaxy's 2-0 defeat to Pirates on Saturday at Orlando Stadium in a match where Galaxy chair Tim Sukazi was denied entry to a change room.

Mkhize told Sowetan yesterday that he wants to teach the Pirates media officer a lesson.

“I just came from Orlando police station to open a case against Thandi after I was slapped on Saturday,” he said.

“As I’m speaking to you now I’m waiting for a case number but you can verify with the police there. I can confirm that the case has been opened.

“I had to sit down with the legal team and we decided to open the case because we cannot allow a situation where a particular individual hits another and waits and does nothing.

“She needs to learn a lesson and suffer consequences and we will allow the law to take its course.”

Mkhize was allegedly slapped during a scuffle with Pirates security officials who tried to stop Sukazi from entering the change room.

“It’s because of the incident that happened as a game was about to start. They denied our chairman access to enter the change room,” he said.

“I was already inside, so they instructed one of the guys who work at the stadium to lock the door.

“As he was about to lock the door, I asked why are you locking the door because the chairman is eligible to come to the change room. I was pushed and shoved and in the middle of that, Thandi laid her hands towards my face.

“So, we leave it to the law to take its course.”

Merafe could not be reached for a comment nor did she respond to requests for comment. Orlando police station spokesperson Monica Hangwani confirmed that the case was opened.

Galaxy owner Tim Sukazi: 'One of the most disgraceful scenes ever seen in SA football'

TS Galaxy owner Tim Sukazi has spoken out about the events leading up to the fracas at the entrance to the Orlando Stadium field and change rooms on ...
Sport
6 months ago

Luvuyo Memela came off the bench to rescue a point for AmaZulu as the KwaZulu-Natal side drew with Chippa United in a four-goal thriller at Kings ...
Sport
6 months ago

Ex-Chiefs and Pirates coach Muhsin Ertugral: ‘Sundowns is the big club now, sorry but it’s like that’

Former Kaizer Chiefs and Orlando Pirates coach Muhsin Ertugral says Mamelodi Sundowns are the biggest club in the country at the moment as their ...
Sport
6 months ago

He has no magic wand to miraculously transform the club and has relied on making sure that his players start to believe in themselves, are better ...
Sport
6 months ago
Next Article