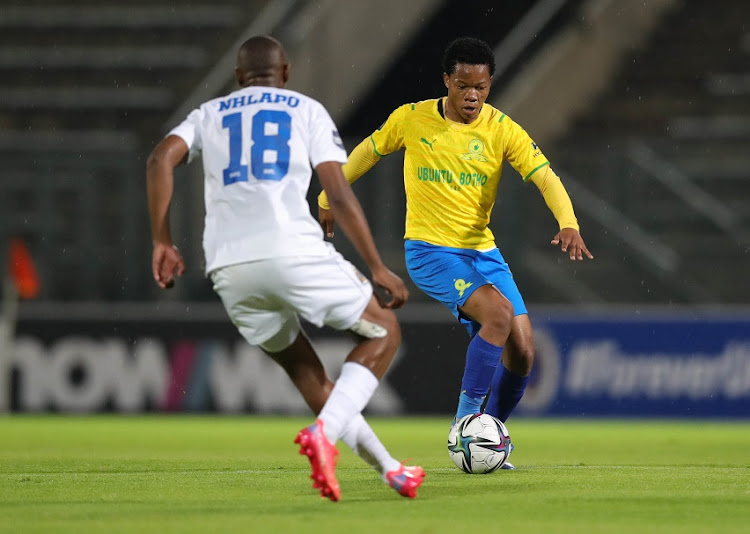 Sphelele Mkhulise of Mamelodi Sundowns is challenged by Siyabonga Nhlapo of Supersport United in the DStv Premiership match at Lucas Moripe Stadium in Pretoria on December 11 2021.
Image: Samuel Shivambu/BackpagePix/Gallo Images

Mamelodi Sundowns have tightened their grip at the top of the DStv Premiership standings with a hard-fought and crucial 1-0 win over SuperSport United in the Tshwane derby at Lucas Moripe Stadium on Saturday night.

With this win the Brazilians have now opened a 14-point lead over second-placed Orlando Pirates. They remain the only team yet to lose a match in the league this season and unbeaten after 25 away league games.

SuperSport have dropped to fifth spot and coach Kaitano Tembo, if he is back in the dugout, will be under pressure during their remaining two matches of the year against Sekhukhune United and Cape Town City.

Sundowns took the lead after nine minutes when on-form attacker Peter Shalulile put the ball beyond the reach of SuperSport goalkeeper Boalefa Pule, who got a rare start between the sticks.

SuperSport confident of another 'first' against Sundowns

SuperSport United workhorse Jamie Webber sees no reason why they can’t be the first team to hand Mamelodi Sundowns their maiden league defeat of the ...
Sport
5 months ago

Shalulile, who rifled home his 12th goal of the season, was released by a cleverly-taken pass from Themba Zwane that gave SuperSport central defenders Kegan Johannes, Onismor Bhasera and Thatayone Dothlokwe no chance.

There is no rest for Sundowns as they have Baroka FC and Pirates on Tuesday and Friday as they continue with their bumper-to-bumper schedule before the Christmas break.

After Baroka and Pirates, the Brazilians will still have to contend with tricky clashes against unpredictable AmaZulu and improving Marumo Gallants before the festive break.