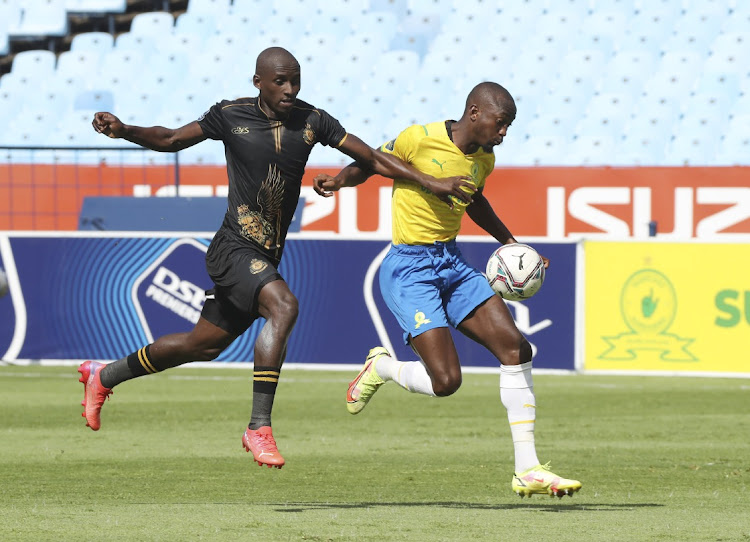 Peter Shalulile of Mamelodi Sundowns challenged by Zukile Mkhize of Royal AM during the DStv Premiership 2021/22 football match between Sundowns and Royal AM at Loftus Stadium, Pretoria.
Image: Gavin Barker/BackpagePix

Even with a 3-2 victory, their 10th in the league this term, Mamelodi Sundowns co-coach Rulani Mokwena was very critical of the way they prepared for their match against Royal AM yesterday.

In a match where reigning referee of the season Thando Ndzandzeka was certainly not in his element at Loftus Versfeld Stadium, Sundowns prevailed courtesy of a brace from talisman Peter Shalulile and Thabiso Kutumela’s single strike.

At some point Sundowns were 3-0 up, but Bafana Bafana striker Victor Letsoalo came off the bench to net a double for Royal, dignifying the scoreline. Mokwena felt as the technical panel they failed to do proper preparations for the tie.

“It’s important to place a disclaimer and say it’s not a lack of effort and energy from the players. The players did well but structurally we were very uncomfortable.

"So, this [rather lukewarm display] is on us as coaches. It’s on our shoulders. We could have done better to help the players prepare,’’ said a visibly dispirited Mokwena in his virtual post-match interview.

“Normally, I watch our last game twice or three times and do the corrections maybe on the third or on the fourth time, but I don’t think I am going to watch this game too many times because we struggled a little bit with a structure.”

Ndzandzeka made a number of questionable decisions at both ends. Denying Royal’s Tebogo Potsane a clear free-kick just outside the box, when he was fouled Mosa Lebusa in the first half, was the harshest decision went against the visitors. Instead, Potsane was booked for dissent.

On the other hand, awarding Royal a penalty, that was calmly slotted in by Letsoalo to take his season tally to eight late in the second half, when the ball touched Rushine De Reuck stomach not his hand, was very unfair to the hosts. Mokwena was reluctant to comment on the way the match officials handled the match.

The win helped Sundowns stretch their lead at the summit of the log, while Shalulile also boosted his chances of winning the Golden Boot with his 10th and 11th DStv Premiership goals of the campaign.

AmaZulu and Orlando Pirates' frustration of not winning matches continued after playing to a 1-1 draw at Kings Park Stadium last night.
Sport
6 months ago

Barcelona crashed out of the Champions League following a 3-0 defeat at Bayern Munich on Wednesday, failing to make it past the group stage of the ...
Sport
6 months ago

Kaizer Chiefs adhered to health standards set by the national authorities and their “responsibility to our players, staff and the football community” ...
Sport
6 months ago

Maritzburg United chairperson Farook Kadodia says his club will pursue their protest and seek a walkover in a disciplinary committee after Cape Town ...
Sport
6 months ago
Next Article