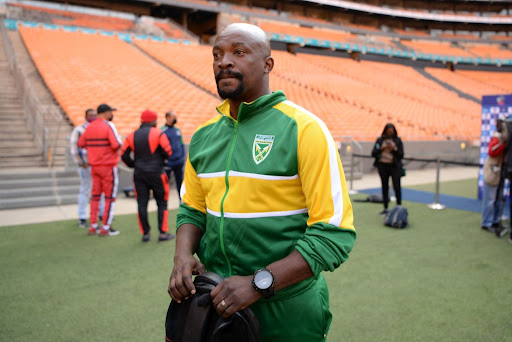 Golden Arrows coach Lehlohonolo Seema has candidly admitted that they were surprised by Mamelodi Sundowns’ starting line-up during their 3-0 MTN8 semifinal, second leg loss at Lucas Moripe Stadium on Tuesday.

Due to injuries to some of their regular starters, the Sundowns coaching trio of Manqoba Mngqithi, Steve Komphela and Rulani Mokwena made four changes to the team that beat Orlando Pirates 2-0 last weekend.

Denis Onyango was replaced by Reyaad Pieterse between the sticks, Divine Lunga came in for Mosa Lebusa in the defence and Haashim Domingo and Pavol Šafranko replaced Rivaldo Coetzee and Kermit Erasmus.

Mngqithi, Komphela and Mokwena also made an interesting positional switch, with left footed Lyle Lakay moved across the defence to take over at right back, and that move caused havoc with Seema’s planning.

“If you look at their past three games, they have not used a lot of players that they used against us,” said Seema.

“Some of the players like Šafranko and Kutumela have been coming on from the bench in recent matches but when was the last time you saw the goalkeeper Reyaad Pieterse play?

“Just look at their line-up, I don’t have to say more. Once we saw the personnel that they put out there, we said to ourselves that we have analysed them but they come with a different line-up.

“It was always going to be a difficult one against a team of this quality, but we are learning as Arrows coaches. Whenever we come up against our senior coaches we always have difficult games with this young squad that we have, [but] there is promise for the future.

“Just look at the technical team of Sundowns. We take comfort and positives from the second half performance, where we played some good attacking football and our players were brave.

“There are a lot of things that we take out of this match, which will put us in good stead for the rest of the season.”

Mngqithi said that they were forced to make changes because of injuries.

“People will say we lost focus because the team changed too much from the previous match, but that was not our plan,” he said.

“We lost Mosa Lebusa, Denis Onyango and we had to try to find solutions, come up with strategies to improve and make sure that we have a better performance.

“We also lost Rivaldo Coetzee and that’s why we had to come with the team that we came in with, but otherwise we have been conservative to make sure that we don’t lose track of what we want to achieve.”