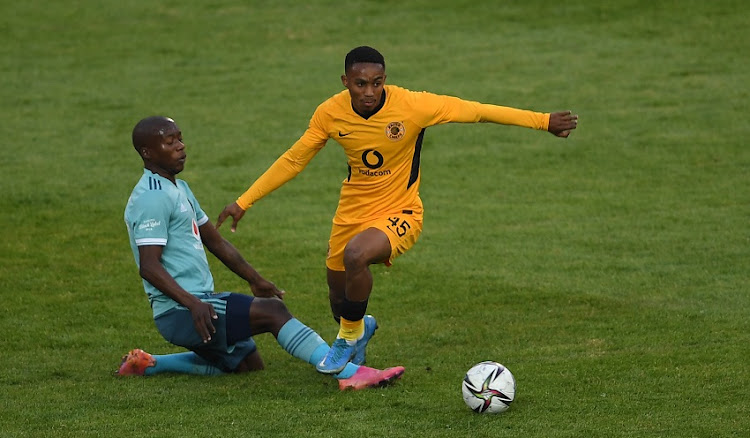 Ben Motshwari of Orlando Pirates and Njabulo Blom of Kaizer Chiefs during the Carling Black Label Cup match between Pirates and Chiefs at Orlando Stadium on August 1, 2021 in Johannesburg.
Image: Lefty Shivambu/Gallo Images

Kaizer Chiefs utility player Njabulo Blom is determined to take full advantage of the  opportunity he has been given after receiving a call-up to the Bafana Bafana squad.

Bafana face Zimbabwe in an away 2022 World Cup qualifier on Friday and return to SA to host Ghana at FNB Stadium in Johannesburg on Monday.

The 21-year-old player, who has featured in all of Chiefs' games this season, says he's not going to let any opportunity to feature in the two high-profile international games pass him by.

“I am trying to give my best in every position that they play me in, that’s the mentality I have at the moment,” Blom told Amakhosi's website.

“I started like a house on fire [this season] playing right back, it’s this mentality of using every opportunity while I still have it.

“Wherever they put me, I will do my best and work hard.”

He said he is ready to fulfil a long-held dream of representing his country.

“I am very happy that I am going to represent my country,” he said.

“It is every player’s dream. I thank God that he gave me the wisdom and strength [and] got this opportunity.

“It means a lot, because now I am representing the entire country.

“Whenever I get the opportunity, I have to give my best. Everyone will be watching. I have to keep my feet on the ground and focus.”

The young utility player, who made his debut for Chiefs in a 2-0 win against Golden Arrows in a league match in June 2019, has been deployed as a right-back this season, somewhat out of his usual position, but he has been revelling in the role.