'His experience will be vital for the club this season' 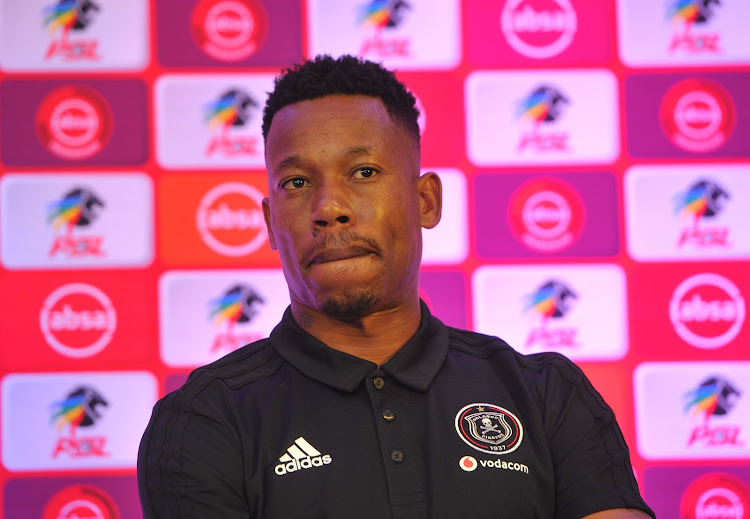 On Wednesday, Pirates confirmed they had given Jele a one-year contract extension. The 34-year-old defender, who has been at Pirates since 2006, struggled with injuries last season and at some point played second fiddle to Ntsikelelo Nyauza and Innocent Maela in partnering vice-captain Thulani Hlatshwayo.

Many had predicted Jele would be released to make space for new signing Kwanda Mngonyama and fledging centre-backs at the club like the 21-year-old Thabiso Sesane and 24-year-old Sandile Mthethwa, who spent the past two seasons on loan at Chippa United.

However, Sangweni, who played with Jele for six years at the Buccaneers until a nasty knee injury forced him into retirement in 2016, believes the club's decision to keep the defender for another season was a good one.

“I applaud Pirates for keeping Happy. Those people who say he’s finished don’t know what they’re talking about. He’s still an important player not just for motivating youngsters but on the pitch as well,” Sangweni told Sowetan yesterday.

“I played with Happy. I know how committed he is to his career. His experience will be vital for the club this season. His advantage is that he also plays at right-back, so you can’t say he no longer has a role to play.’’

An excited Jele has made it clear he’s still hungry for more success with the Buccaneers before perhaps calling it a day. “I am happy to have signed a new contract. As a player I believe I still have a lot more to give and achieve with this club,” Jele told Pirates’ website.

Meanwhile, Pirates also announced the “amicable parting of ways with Gladwin Shitolo [another centre-back who spent the past few seasons on loan at Golden Arrows], following a meeting between both parties”.

The Soweto giants also revealed that the deal that was going to result in defender Justice Chabalala spending this season on loan at Chippa United had collapsed.

“We would like to clarify that after initially announcing the loan move of Chabalala to Chippa, the 29-year-old defender will no longer be joining the Chilli Boys, as the player has instead preferred a loan move to Sekhukhune United,” said Pirates on their website.

AmaZulu coach Benni McCarthy: 'We can go one better than Kaizer Chiefs in the Champions League'

Former Kaizer Chiefs left-back Philani Zulu and SA under-23 captain Tercious Malepe were among the players that were unveiled by AmaZulu on Thursday ...
Sport
5 months ago

Playing as a centreback in many games for Orlando Pirates last season helped Innocent Maela grow and improve as a defender‚ the Bafana Bafana ...
Sport
5 months ago
Next Article