AmaZulu coach Benni McCarthy: 'We can go one better than Kaizer Chiefs in the Champions League' 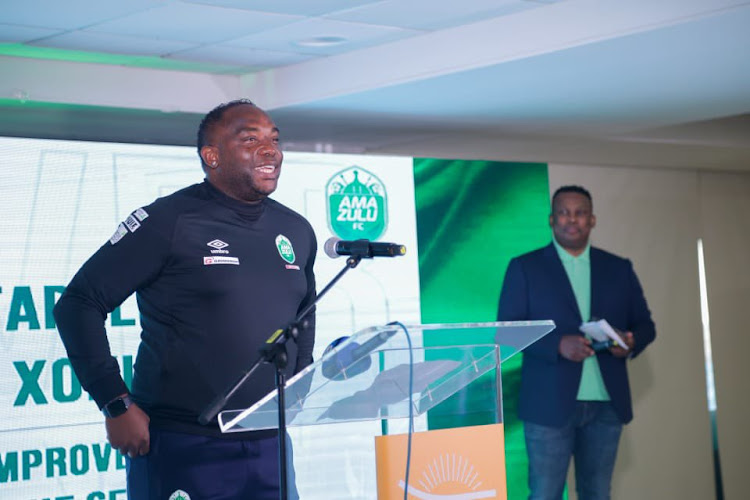 Former Kaizer Chiefs left-back Philani Zulu and SA under-23 captain Tercious Malepe were among the players that were unveiled by AmaZulu on Thursday afternoon.

The club finished in second place behind champions Mamelodi Sundowns last season and earned the right to compete against the continent's best sides in the Champions League.

Chiefs managed to reach the final of the Champions League last month‚ where they lost to Egypt's Al Ahly‚ and AmaZulu coach Benni McCarthy  believes that his charges can go one better and win continental club football's biggest prize.

“We can go one better than Kaizer Chiefs in the Champions League. No disrespect to Chiefs but we genuinely think we can do better‚” he said as the club unveiled new players on Thursday.

"The president (Zungu) said it, we're not going in there in the Champions League just to add numbers. We're going because we see ourselves as title contenders.

"If we look at what we did last season (when we) finished second, and what Kaizer Chiefs did in the league (eighth place finish) and then finished runners up in the Champions League, I think we got a hell of a shot of goingall the way.

"With all due respect to Chiefs, but I think if they can reach the final of the Champions League, we can go one better. Why not?

"So I'm genuinely not meaning that to disrespect anybody, but I think jah, we challenge ourselves everyday and we think we have got what it takes.

Usuthu will become the second KwaZulu-Natal side‚ after Manning Rangers in 1998‚ to play in the Caf Champions League after finishing second and 13 points behind Sundowns in their first season with McCarthy at the helm.

Former Kaizer Chiefs left-back Philani Zulu and SA under-23 captain Tercious Malepe were among the players that were unveiled by AmaZulu on Thursday.

“What this team did last season‚ it would have been criminal to get rid of the guys who worked extremely hard last season. Bringing new blood was basically about where we could have strengthened given what we’re about to embark on‚ especially in the Caf Champions League‚” McCarthy said.

AmaZulu president Sandile Zungu used the event to also unveil the club's new kit and to hand awards to the players after they managed to finish runner-up behind Sundowns last season. He also announced a number of supporting partners.

“We’ve had to make new signings because we’ve got a grueling season ahead of us‚” Zungu said.

The signing of Zulu and Malepe comes just days before Usuthu know the identity of their opponents in the Champions League. The draw for the first round will be conducted on the August 15 in Cairo‚ Egypt‚ with the first leg matches set to begin towards the end of next month.

“I want AmaZulu mentioned in the same breath as Africa’s giants. The best is yet to come‚” said Zungu of Usuthu’s ambitions as they enter a Caf club competition for the first time.

“On the vision of the club‚ we have a very simply plan - this coming season we must at least lift one trophy. We want to improve our performance on last year. We conceded 23 goals‚ why don’t we concede 11 goals?

“We’re not going to Caf to add numbers‚ but going to compete.”

AmaZulu will open their Premiership campaign against Sundowns on August 20 at Loftus Stadium. The match will come less than a week after McCarthy’s charges have hosted Cape Town City in the MTN8 in Durban on August 15.

Usuthu will wrap up their pre-season with an appearance at the KZN Premier’s Cup which will be played at the Chatsworth Stadium in Durban this weekend. Neighbours Lamontville Golden Arrows‚ who finished fourth on the Premiership log last season‚ will fight AmaZulu for a place in the final in the Premier’s Cup on Sunday.

Zungu‚ who took over the ownership of the club in October last year‚ said the club was committed to improving on the form they showed on the field last season.

Midfielder Makhehleni Makhaula and goalkeeper Veli Mothwa‚ who both joined the club last season‚ were the biggest winners at the players’ awards handed out by Zungu and McCarthy.

Playmaker and Most Assists of the Season: Augustine Mulenga