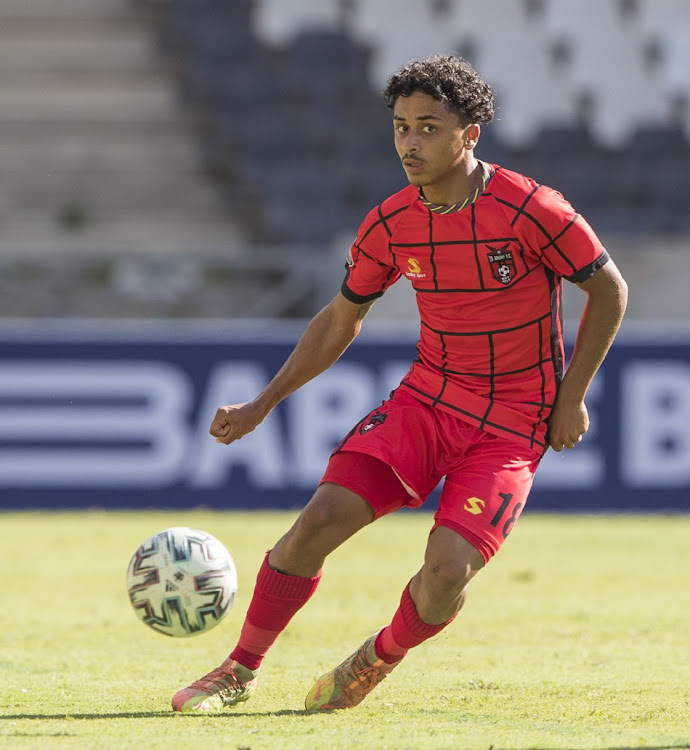 The manner in which highly rated TS Galaxy midfielder Ethan Brooks became a professional footballer is consonant with the famous adage that "luck is what happens when preparation meets opportunity".

Brooks’ dream of playing top-flight football came to fruition when he least expected it three years ago. The 19-year-old, who made his Bafana Bafana debut in their 3-2 international friendly success over Uganda a few weeks ago, has narrated how he joined the Rockets.

“I joined Galaxy in 2018. I think me joining them was a matter of luck because they spotted me randomly at Panorama Sports Club on the West Rand where they were training,’’ Brooks told Sowetan.

“I was just unknowingly training there with my then amateur team called Panorama FC when coach Dan [Malesela] saw me, before inviting me to train with them. He signed me a few days after I’d trained with his team... the rest is history as they say.’’

The midfield magician, who hails from Parklane in Johannesburg, was on Tuesday included in the Bafana squad that will do duty at the Cosafa Cup, starting from July 7-18 in Gqeberha.

Brooks admits his meteoric rise has left him stunned. “To be honest, I didn’t expect that my career would blossom this fast. I didn’t think I would get a Bafana call-up at this age but I guess when you’re working hard you are rewarded, so I see the national team call-up as a reward,’’ said the teenage ace.

Despite putting in a series of impressive displays in the just-ended campaign, Brooks could not find the back of the net even once. Even so, the youngster is not disconcerted.

“Failing to score a goal from the 12 league games I played isn’t something that fazes me because I know goals will come. I am not in a rush and put myself under pressure because goals must come automatically,’’ said Brooks, who is the first-born of his parents’ three children, with two younger sisters.

Brooks sees himself plying his trade in Europe in the next three years, targeting to go to countries such as Belgium and Netherlands, where it would be easy to be noticed by big guns.

“I have set myself targets, like in three years' time I want to be playing in a European country, maybe Belgium or Netherlands, but it must be where it’ll be a stepping stone to bigger leagues,’’ Brooks noted.

Veteran midfielder Reneilwe Letsholonyane will only decide whether he will retire from football before the new season starts in a few weeks.
Sport
7 months ago

Maritzburg United chairman Farook Kadodia has stressed the club is not “up for sale”‚ clarifying that if the club is unable to secure additional ...
Sport
7 months ago
Next Article