Chippa on the brink of retaining status 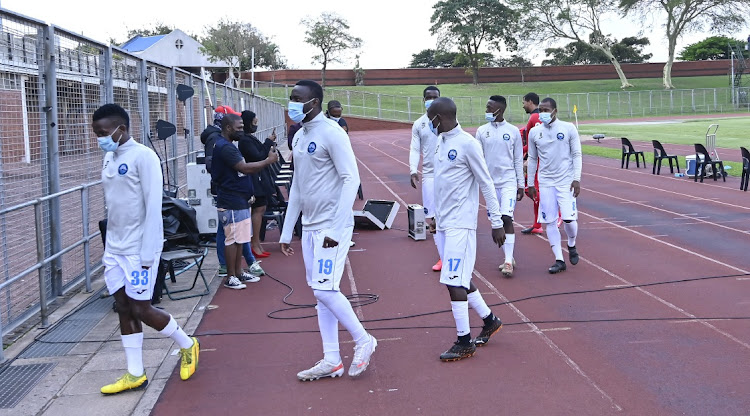 Richardsbay players leave the field during the 2020/21 Promotion Playoff game between Royal AM and Richards Bay at Chatsworth Stadium.
Image: Gerhard Duraan/BackpagePix

It is now up to the Premier Soccer League (PSL) to decide on the punishment for Royal AM after they failed to honour their second match of the playoffs in a row.

As they had promised, Royal didn’t pitch for their fixture against Richards Bay yesterday, after the abandonment of their first match against Chippa United on Tuesday at Chatsworth Stadium.

Richards Bay took the field alone‚ only for the referee Victor Hlungwani to signal the game over before it even started. That resulted in Richards Bay getting a walkover and a 3-0 win, but Chippa remain favourites to retain their Premiership status.

Royal are likely to be charged or suspended as rules in the NSL handbook for a team not showing for a match state: “Where a match is not played because of the late or non-arrival of a member club team‚ or of both teams‚ the offending member club or member clubs will be charged with misconduct.”

The PSL has been mum on Royal’s decision to abandon their two matches in the mini-league and it remains to be seen what punishment they will receive for their behaviour.

Royal have been embroiled in a court saga in which they have aimed to be reinstated to the top of the GladAfrica Championship.

That was the position they were dislodged from when Sekhukhune United were awarded three points in an arbitration ruling that was upheld in the Southern Gauteng High Court‚ with leave to appeal dismissed.

Meanwhile, after getting six points from two matches, Chippa could retain their status should they beat Richards Bay at Umhlathuze Sports Stadium tomorrow (3pm).

Chippa are on six points and will have an unassailable nine-point lead should they win tomorrow.

They will be guaranteed another walkover as their last match is against the rebellious Royal at Nelson Mandela Bay on Wednesday.

As they had promised‚ Royal AM did not turn up to honour their Premier Soccer League (PSL) promotion-relegation playoffs match against Richards Bay ...
Sport
7 months ago

While the battle between Royal AM and the Premier Soccer League (PSL) continues to rage on, Richards Bay indicated yesterday they would travel to ...
Sport
7 months ago

Royal AM CEO Sinky Mnisi has confirmed the club will not honour their second promotion-relegation playoff match against provincial rivals Richards ...
Sport
7 months ago
Next Article