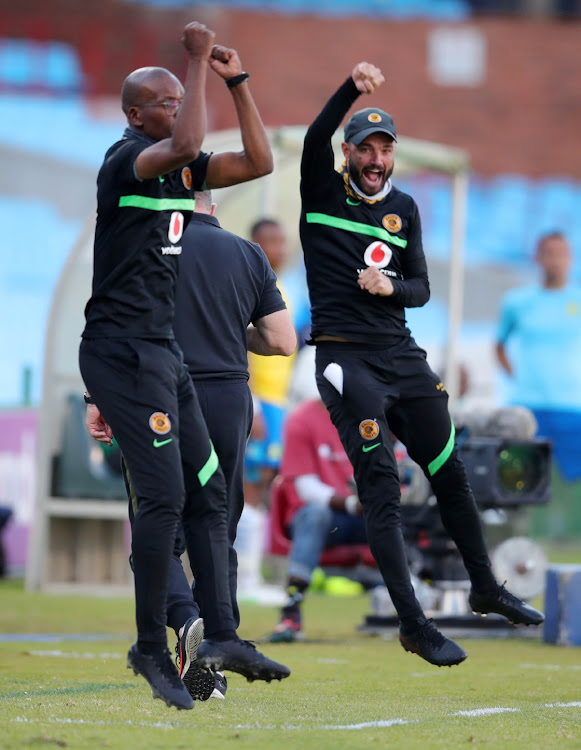 Kaizer Chiefs caretaker coaches Arthur Zwane and Dillon Sheppard celebrate together in a past action. They will lead the team again this weekend.
Image: Samuel Shivambu/BackpagePix

Gavin Hunt’s departure from Kaizer Chiefs would not affect Amakhosi in the CAF Champions League.

This is the view of former midfielder Tinashe Nengomasha ahead of Chiefs’ semifinal first leg against Wydad Casablanca on Saturday (9pm) at Mohamed V Stadium.

Hunt was fired with two games remaining in the DStv Premiership season and was replaced by Stuart Baxter, who is yet to receive his work permit.

Chiefs announced late yesterday that assistant coaches Arthur Zwane and Dillon Sheppard will continue to sit on the bench while they work on getting Baxter his work permit.

But Nengomasha believes the team will still cope against Wydad. “Coach [Baxter] may be new but many faces in the team are familiar with him. I hope they can do justice for him and qualify for the final,” Nengomasha told Sowetan yesterday.

“I think it is a plus that almost the whole team worked with him before. I’m hoping that this will inspire the team, someone who knows the players, who brought belief before and I feel they can go all the way. But nothing is guaranteed. They still have to work for it.”

Chiefs have played Wydad twice in the group stage this season, losing 4-0 away in Ouagadougou before winning 1-0 at home in a game in which the Moroccans sent a weakened team after already qualifying as group winners.

While the Moroccan giants are unbeaten in their past 12 matches, the Zimbabwean international feels Amakhosi have a chance to cause an upset.

“I think they got a big chance. In football, you can be having a good run but someone can come and end that,” he said.

“No-one is giving Chiefs a chance but they have nothing to lose. They can go there and get a draw and come back home and do the business.”

Returning Kaizer Chiefs coach Stuart Baxter will not be on the bench when Amakhosi play the first leg of their Caf Champions League semifinal match ...
Sport
11 months ago

Stuart Baxter believes he has arrived at a Kaizer Chiefs where, despite his predecessors’ failure to win trophies, strong coaching has left him a ...
Sport
11 months ago

Kaizer Chiefs midfielder Akumu Agay has laid bare his desire to see out his three-and-a-half-year deal at Naturena amid talks that the club aim to ...
Sport
11 months ago
Next Article