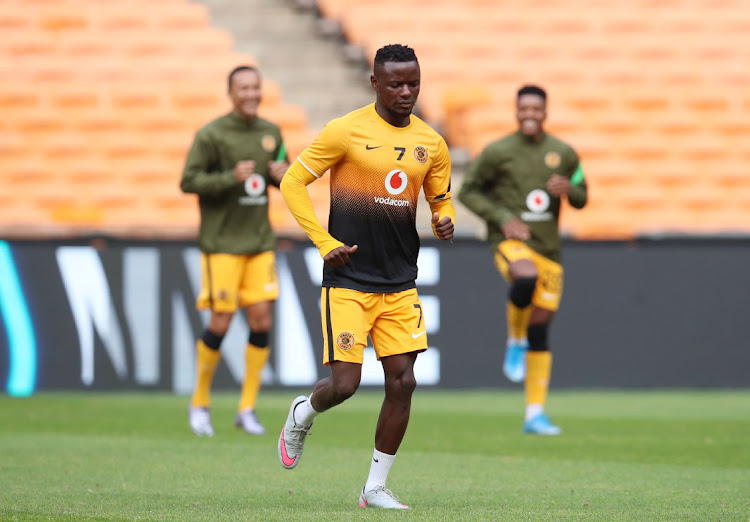 Zambian forward Lazarous Kambole isn’t stressed by the growing rumours that Kaizer Chiefs intend to terminate his contract soon, after yet another uninspiring season.

Kambole, who joined Chiefs on a three-year deal from his native Zambian side Zesco United in July 2019, is believed to be among a number of players who will leave Naturena as the Soweto club look to overhaul the squad.

In his second season with Chiefs, Kambole again couldn’t live up to the expectations he arrived with. The 27-year-old attacker managed just four league starts in 11 appearances without scoring a goal in the recently concluded domestic season.

In the 2019/20 season, his  first in SA, Kambole started 11 games and came on as a substitute five times, netting one goal in the league. One could argue that the only reason Kambole is still a Chiefs player is because the club  couldn’t make any signings in the past two transfer windows, thanks to their Fifa ban that ends next month.

“When it’s a transfer window period, of course there are always rumours. At the moment I am a Kaizer Chiefs player and that’s what matters. I don’t want to stress about rumours,” Kambole told Sowetan at a charity event in Soweto yesterday.

At previous club Zesco Kambole used to operate as an out-and-out No 9, a position he’s hardly played in at Chiefs as he’s been used more as a winger with the likes of Samir Nurković and Leonardo Castro the preferred centre-forwards.

Some feel Kambole would excel in his natural position. However, the Zambian has suggested he has no problem with playing in other positions on the pitch.

“We, as footballers, we are employed to play football. So as a player you need to be flexible, you need to at least play more than two positions. Once you’re called upon to play a certain position, you mustn’t say ‘no’ because you’re paid to play football,” stated Kambole.

“For me, it’s nice to be able to play different positions. I enjoy football regardless of the position I am playing.”

Arthur Zwane wished to reflect on the positives and lessons learnt from a tough season for Kaizer Chiefs‚ saying Amakhosi should not over-celebrate ...
Sport
1 year ago

Recently crowned Mamelodi Sundowns coach Manqoba Mngqithi says he was never bothered by the doubting Thomases who questioned his appointment when he ...
Sport
1 year ago

Mamelodi Sundowns have joined thousands of football fans around the country to pay tribute to the club's former communications manager Thulani Thuswa.
Sport
1 year ago
Next Article